The Bachelor, The Bachelor Season 16, who got eliminated, who got kicked off last night, who is left on the bachelor

Scrapbooks, Lap Dances, Topless-ness. Oh, My.  If each Bachelor episode had a theme, I think this week’s would have been titled, “Uncomfortable.”  That one word pretty much sums up how I felt the entire two hours.

Ben and the bachelorettes flew to Panama.  In Panama Kacie B. got the one-on-one date, which involved being on their own private island and foraging for their food.  Not my idea of a romantic date, but they seemed to enjoy it.  Plus, I earned points for Fantasy Bachelor so no complaints here.

Group Date: Here is where the uncomfortableness begins.  The girls and Ben went to a local village in Panama and dressed in tribal garb.  Ben’s ensemble consisted of a loin cloth.  No man should wear a loin cloth.  As for the ladies, they had beaded numbers for their tops and all but one kept their bikinis on underneath.  Can you guess which one? Yep, Courtney.  Another episode where she loses her clothes.  Surprise surprise.  I really think she just wants the camera time.  The longer she’s on the screen, the more publicity she receives.

Then later in the episode Courtney rents out a private room at the hotel and invites Ben over.  He never showed up. Points to Ben for giving the rose to Lindzi on the date and not going to Courtney’s room. Negative points for being so distracted by her boobs the entire date.

The Dreaded Two-On-One Date: Also known as the most awkward date in the world.  Blakeley and Rachel were chosen.  The date?  Latin dancing.  Please tell me how you can do a Latin dance with three people.  Fail.  Awkwardness factor increased by 10.

How to Lose a Guy in 10 Minutes: Blakeley obviously didn’t take any cues from “How to Lose A Guy in 10 Days,” because she made Ben a scrapbook and showed it to him on the two-on-one.  At one point she said, “This is where I started falling for you and could see myself in San Francisco with you.”  How long has she known him?  A couple weeks?  All that was missing from the scrapbook were computer-generated photos of their future children.

Side commentary from The Bachelor viewing party: “I’m a hopeless romantic and even I’m creeped out by that.” – Juliana

Apparently it creeped Ben out too, because he sent Blakeley packing.

Finally, adding to the uncomfortable factor, bring in Casey S.  Chris Harrison pulled her aside and asked her about a boy back home.  Apparently they had broken it off because he hadn’t wanted to get married, but Casey S. still had unresolved feelings about him.  She told Ben and left this episode in tears. I wanted to feel bad but I just got 30 bonus points on Fantasy Bachelor for predicting her departure. Woot!

Oh, wait.  How could I forget the most awkward moment of the episode.  Jamie. Oh, Jamie, Jamie, Jamie.  How to start?  When you want to show a guy you are interested in him don’t go from reserved to sexual kitten in one fell swoop.  At least don’t do it awkwardly.  Don’t tell him that you think about what you want to do to him and then straddle him and awkwardly make out with him for your first kiss whilst giggling.  Then whatever you do, don’t follow it up by giving him a long-winded instruction manual on “How to Kiss.”  Even a scrapbook would have been better.

Who got kicked off: As always, red X’s indicate ladies who left this week. 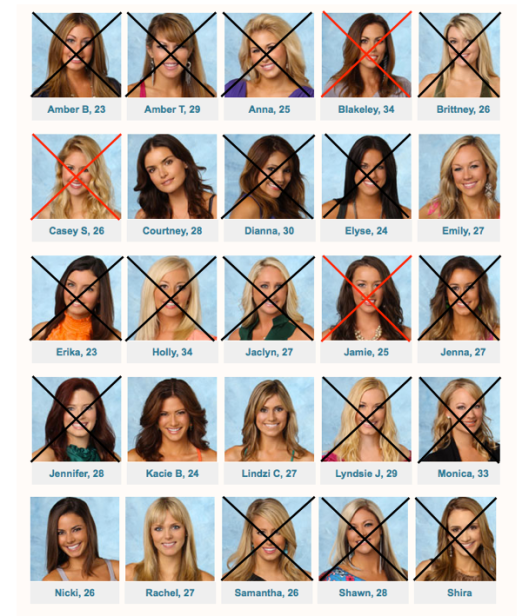