Break out the Kleenex and that extra bottle of wine or pitchforks because Ben sent Kacie B. home last night.  “What the __  just happened?”  I think was the communal sentiment around the “Bachelor Nation” (as Chris Harrison has christened us).  I was not expecting fan favorite, Kacie B., to leave so soon.  Too bad she can’t be next season’s Bachelorette because they already gave that title to Emily Maynard.

Who Got Kicked Off: 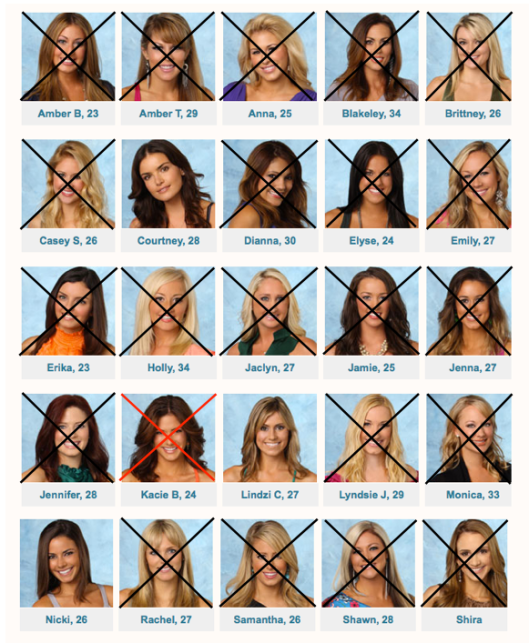 Lindzi – Producers took us to Ocala, FL, Lindzi’s hometown first.  Of course she rode in on a horse once again.  The coolest part of this date though had to have been the chariot race. Yes, a chariot race.  Ben and Lindzi vs Lindzi’s parents.  Who wouldn’t want to be a part of a family that does chariot races in their spare time?  Now I know why he’s kept Lindzi around this whole time.  One weird thing was Lindzi kept introducing Ben as her boyfriend.  I think she forgot about the minor detail that Ben is dating three other women.  I don’t know about you but I wouldn’t label him my boyfriend just yet.

Kacie B. – Next we traveled to Clarksville, TN and were forced to revisit high school as Kacie B. had a high school band play on the football field while she twirled a baton.  What may have led to her departure though, is that her parents did not approve of Ben.  Kacie’s mom was not comfortable having Kacie move to California and Kacie’s dad said he would not at this point give his consent to let Ben marry his daughter.  They weren’t shy about hiding this from Ben either.

Nicki – In Nicki’s hometown of Fort Worth, TX, the pair tried on cowboy boots and hats.  Now, I am all for the smoldering cowboy look but turns out it’s not for everyone.  Ben falls into this small category of men.  His hair in that cowboy hat was just all kinds of wrong.  I feel I need to take a moment to address the Ben’s hair situation, seeing as there is even a Twitter handle dedicated to this unfortunate hair style: @BenFlajniksHair

Sidenote: Ben’s hair –  I’m surprised I’ve managed to blog recaps while staying clear of hair jokes.  I’m all for the unkempt look, but parting it down the middle and smoothing it down is just not sexy.  Someone tweeted a picture of him next to Francine from Arthur and now I can’t get that image out of my mind every time I look at him.  You’re welcome, Bachelor Fans.

Okay, back to Nicki.  Nicki and Courtney threw out the big L word.  And no, they didn’t even soften the blow by putting “falling” in front of it.  Nope, they told him they were IN LOVE with him.  Courtney even went so far as to stage a fake wedding ceremony.  How long have they known him?!  Too soon.

Courtney – Scottsdale, AZ – Alright, so Courtney.  We finally got to meet her parents and her sister.  Nothing crazy to report.  They seemed relatively normal from the clips that were shown.  The only thing off was Courtney planning a fake wedding complete with a minister, white dress, and rings.  Not only that, she made Ben write his vows!  If that didn’t scare him off, he must be in it for good.  I’m going to have to go back and re-watch it because a whole slew of bachelor fans tweeted that the vows Courtney wrote were ripped off from Sex and the City.

Funny Tweet of the Night: If you want some entertaining commentary while you’re watching The Bachelor, I would suggest following @Possessionista on Twitter.

Fantasy Bachelor Predictions: I think I’m starting to lose my Bachelor cred with this whole trying to predict who’s going home thing.  But has that ever stopped me before?  In the words of Lindzi, if you fall off the horse you just have to get right back on it.  With that in mind, I’m going to stick with my prediction that Nicki is going home, Lindzi and Courtney will be the final two, and Ben will choose Courtney.

For some reason, Francine – oops I mean Ben – and Courtney just make a very odd couple together.  I think it’s meant to be.

Next week, Switzerland for some fantasy dates.  Until next time, Bachelor Fans.