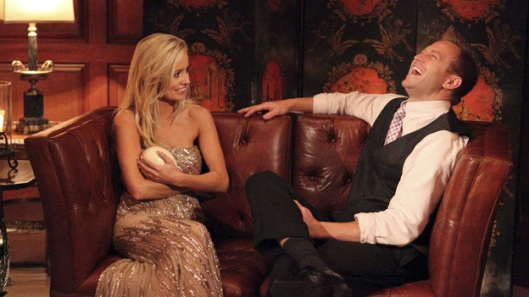 Doing things a little differently, filming took place in Charlotte, NC so Emily could stay at home with her daughter Ricki, 6. I had forgotten how much I liked Emily. (Kudos to ABC producers/editors for reminding me of this.) I mean how can you dislike a Children’s Hospital event planner emanating southern charm and who says things like “Oh, golly”? I must have been blinded by my jealousy of how gorgeous and sweet she was.

Now on to my favorite part of the night. The time when contestants put into practice the line/act/entrance they had so carefully crafted and rehearsed with their friends at home. Every exit from the limo brings a new wave of discomfort as I anticipate the humiliation they are bound to endure.

Most Awkward Entrances: They were all pretty boring, standard how-do-you-do’s, I’ll see you inside. Then, well then, Joe came on the scene. I’m not sure what it was, but it looked like some sort of bird mating dance as he exuberantly approached Emily. Following him were the dude (Travis) with the Ostrich egg (still can’t figure that one out), John who’s nickname was “Wolf” (really? really?), Stevie with a boombox, and Randy with his impression of the grandma from last season of The Bachelor. But the winner of the most awkward first impression goes to Brent with his line, “I have 6 kids.” Oh Brent, you started out so well with the name tag bit, then bam! Hello motherhood.

Oh, but wait, I forgot about the personalized bobble heads. Yes, Chris made bobble heads of him and Emily…I, I just don’t know…

Most Adorable Entrance: On the flip-side, my favorite entrance has to go to Ryan. He told her he had written something down and pretended like he was reading it, when what was written on the side Emily could see read “You are so beautiful.” He flipped it over and it read, “I am so nervous.” Adorable. To top it off he used to play pro football, now teaches kids football, and has the cutest dog.

First Impression Rose: Doug who gave Emily a letter his 11-year-old son had addressed to her. After he stepped out of the limo, he asked Emily, “Can I have a hug? I’m a hugger.” Bonus points. I’m a hugger too. 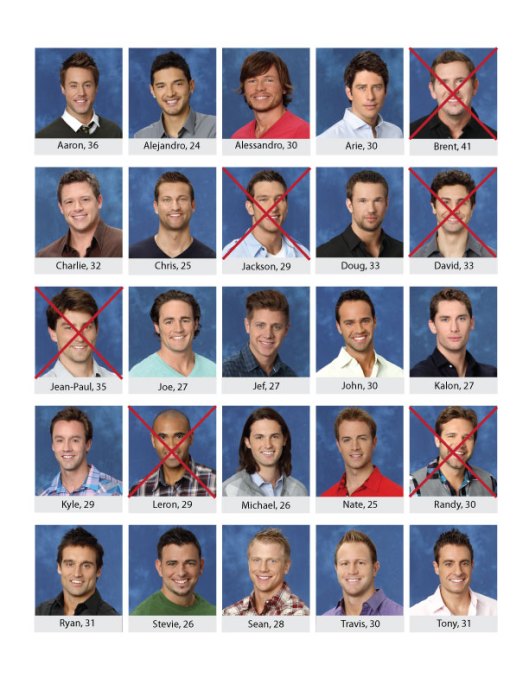 The Cast – Looks like we already have our villain (Kaylon), fan favorite (Jef), survivor of a near-death experience (Charlie), and single parent (Doug) stars all lined up for this season.

My favorite thus far though is Arie the race car driver – Tall, dark, and gorgeous. Upfront about his profession. Genuinely wanted to know if she was okay with that, which she was and confided to producers that he would look good in a race car. Yes, yes he would. 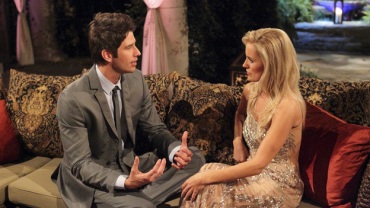 Jef – Cool, confident, trending on Twitter (see below). CEO of a company, involved with charity work. Rode in on a skateboard Back-to-the-Future style.

Side note: Rant on Kalon about to begin. Kalon shows up last in his own private helicopter. Let’s all say it together now shall we? D-bag alert. Then he walks into the cocktail reception and pompously greets everyone. I’m hoping he’s the one Emily throws out later. End of rant.

Tweets of the night: I had also forgotten how much I enjoyed the live side commentary by @Possessionista during the show with her endless quips.

Other recaps: The Bachelorette Expert has some nice photos from the first night. Or you can view the full gallery at ABC.com. And Chris Harrison gave us some of his insight on his blog through Entertainment Weekly.

Bachelorette Fantasy Game: Anyone know if this is happening through Facebook again? I wasn’t able to get it up and running…

All in all it looks like a good season. I mean how can you go wrong with 18 attractive men…ostrich eggs and bobble heads aside.

Until next week, Bachelor Fans!