I was also taken aback by the honesty (or stupidity) of some of the bachelors. [skip to Ryan and Alessandro]

Who Got Kicked Off: Those with the red X’s were eliminated this week. It was a sad day for Shelly the Ostrich Egg. Following the advice of Emily’s friends, Travis let Emily smash Shelly at the rose ceremony. The bachelors toasted to her memory. RIP Shelly. Keep trekking Travis.

One-on-One: Chris (the manly-man as Emily calls him) went on the first one-on-one this episode, which included scaling a building Spiderman-style to get to their dinner. Later they danced to a live concert by country singer, Luke Bryan, where Chris asked if he could kiss her. I’m on the fence about that one…awkward or not? Either way, watch out for this one, Emily likes him a lot.

Group Date: Determined to completely kill the romance (and then put that baby in reverse and back right over it) and really ground these boys in reality, Emily brought her girl friends on the group date followed by a boatload of kids. Yep, a good-old-fashioned grill session, an excellent way to weed out the boys from the men. Then while Emily got the scoop from her friends, she watched the guys interact with a bunch of kids on the playground.

Sean and Doug won over her friends during the interrogations, but it was Sean who left the date with the rose…and Tony who just left the date. He had a mini breakdown missing his son, so Emily thought it was best he go.

Doug you’re pulling at my heart strings. His dad had epilepsy, his mom left, he grew up in foster homes, currently a charity director. Quote: “You have bad days so you know when you have a good day.”

One-on-One: For those of you who watched I know what you’re thinking, Dolly Parton was the one on this date, but no actually Arie went on this date. I know it was confusing what with Emily’s gazed fixed on Dolly for the most part.

Emily took racecar driver, Arie, to Dollywood in Pigeon Ford, TN – that’s right a theme park dedicated to Dolly Parton. Arie, stealing my heart more and more by the minute was a good sport throughout the date and Emily disclosed, “I think he might have a little country in him.” 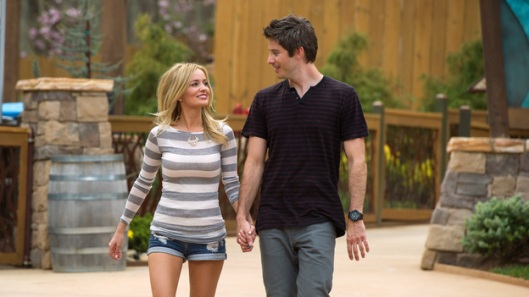 ABC surprised Emily with a guest appearance by Dolly Parton. Emily told Dolly she’s looking for “somebody that I like as much as I love.”

Fun Facts: Dolly Parton is 66-years-old, has known her husband 47 years (married for 45 of those) and met him at the Wishy-Washy laundromat.

At dinner, Emily tried to mess with Arie and threw in a ‘but’ when she was talking about giving him the rose. His face fell and Emily apologized telling him, “Now I know that you might kinda like me.”

Quote of the Night: Emily’s friend Wendy described Sean as “a genetic gift to the world.” Agreed and I’m stealing that phrase.

Failed Quotes of the Night: Ryan (who, as we will recall, Emily thought was Mr. Perfect) told Emily if she gained weight he’d “still love [her] just not love ON [her].” Ryan, keep those comments to yourself. Sidenote: He is wearing on my nerves. Looks like Ryan’s narcissistic side is coming out next week and it’s not pretty.

Kalon: Have I mentioned I don’t like him? He told Emily, “I love it when you talk. I just wish you’d let me finish.” Slap.

Alessandro: “I’m kind of a gypsy.”

Alessandro, oh Alessandro. What hole did you crawl out of and how did you make it this far? In your case, honesty might not be the best policy. Hi, my name is Alessandro. I’m kind of a gypsy, I can’t have a pet, I see myself as the chief of the family, and I like freedom – especially the freedom to date my third cousin. True story.

But the final kicker? Calling Emily and Ricki a “compromise.” She said he should see it as a bonus, but he forthright said he didn’t see it that way and that it wasn’t a language barrier. Blood boiling, Emily booted him out the door before the roses were handed out.

Arie to the rescue! Gave Emily a hug (and make-out session) to calm her down after Alessandro’s departure. Ar-ie, Ar-ie, Ar-ie. I think he might be who she chooses. Too soon?

Tweets of the Night: Again, thank you to @Possessionista for putting into tweets my innermost feelings.

In other news, Michael tried to pull off the half-up-half-down look whilst playing football. Michael, we’re getting to the point where I’m going to have to make a “your hair is worse than Ben’s” joke/reference, especially if you insist on wearing it in a ponytail.

Off to Bermuda next week to put a little romance back in these dates. Until next time, Bachelor Fans!

1 thought on “The Bachelorette Episode 3 Recap”