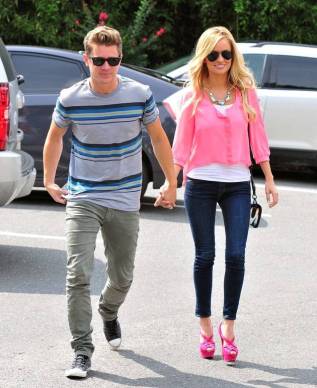 Word around the Bachelor/ette rumor mill is that Emily Maynard was caught cheating via “explicit text messages” to another man. I just don’t know if I can believe it, but US Weekly claims to have the exclusive (hitting the stands Friday according to their site) and to have confirmed the story with Jef’s brother.

The Low Down: Emily and Jef were vacationing at a beach house in Pawleys, Island, South Carolina with Jef’s family. There the pair got into an argument after Jef found those “explicit texts,” oh and photos, to another man. (Anyone else curious to know what those said?)

The couple did some PR cleanup by walking out in public, holding hands in an attempt at solidarity. WetPaint has a live action video of the pic above of the couple responding to the rumor. They seemed to be weathering the tabloid storm nicely. I’m sure there’s not much more to the story other than what’s already been circling around the Internet (texts found, Jef mad, let’s hold hands so they stop taking our blasted picture, moving on). And likely USWeekly is just trying to sell magazines, but will I be at that magazine stand tomorrow? Sadly, yes.