Fantasy suite dates, the island of Antigua and tears. Lots and lots of tears. Like an hour of tears from both Brooks and Des. Between the Antiguan frogs, and the sobbing, and the loud make out sessions, it was hard to distinguish what people were saying this episode, but really all you need to know is Brooks broke up with Des, and Des told him she loves him. And it was pretty gut-wrenching.

The first hour was about Des’ dates with Drew and Chris.

Date 1: Drew and Des explored Antigua. Bet you weren’t expecting that one. Another exploration date, wandering around with the locals. But this time they livened it up by buying a sh*t ton of stuff. Items Drew believes they will hang in their house when they get married. Oh Drew, if you only knew. Des gave him the key to the fantasy suite and they had a really loud make out sesh before kicking out the camera crew.

Date 2: Chris They romped on the beach, took a helicopter ride, Chris read another poem, and he professed his love once more for Des. At dinner their conversation was drowned out by apparently what were the lovely exotic sounds of Antiguan frogs and by lovely I mean completely annoying. (Robert Mills’ (ABC exec) tweet about it made me chuckle though – see below.) Chris asked Des if she’d move to Seattle. She gave a round-about answer of if she were in love blah blah blah, but basically only if Brooks were there.

Grammar rant: It came up a couple times in Des and Chris’ convo and then again with the background music, so I just have to get it quickly off my chest. So feel free to skip ahead. It’s “You and ME.” Not “You and I.” I realize everyone’s trying to be grammatically correct, but it’s not right. Quick tip: If in a sentence you drop the “you and,” it should still make sense. It’s you and ME against the world, Matt White. While I appreciate your soft and soothing tones, you’re messing up the world. End of rant.

Brooks: And the entire second hour was dedicated to Des’ break up with Brooks. Talk about long breakups. This was a doozy.

First Brooks had a sit-down with Chris Harrison. Wait, back up. First Brooks had a sit-down with his Mom and one of his many sisters-in-law to confirm his feelings. Then he sat down with Chris Harrison, where Chris Harrison gave him the steely I’ll-eff-you-up-if-you-crush-Des-for-no-reason stare. Chris grilled Brooks on if Brooks knew what love felt like, if he was afraid to commit, and if he truly wasn’t in love with Des. He made Brooks describe love, then brought up Brooks’ parents’ divorce, then asked him “How does this weigh on you?” Slow clap for Chris Harrison on that one. Calling him out. THEN Brooks sat down with Des for an hour.

Previously Des and Brooks have used this analogy for love: stepping, skipping, walking, maybe some meandering, jogging, running, then the finish line. So I may have added a few, but you get the picture. At one point early on, Des admitted to be in the running stage whereas Brooks said he was jogging. Well, he didn’t do a very good job of keeping pace because Des told him she was at the finish line and that she loved him.

Things Des said:  “I’ve never known what it’s like to be completely loved.”

“I don’t know what it feels like to be reciprocated.” – What the whaaat. Wait a second. Didn’t Drew just say he was ready to get down on one knee? And I’m pretty sure it was written in one of Chris’ poems about his undying love.

“I always love the wrong people.”

“I was conflicted because I didn’t want to share my heart. I wanted to give it to you.”

He didn’t do an awesome job of saying he didn’t love her. He just kept holding her.

Sassy Tweets of the Night: From Robert Mills’ tweets about the Antiguan frogs chirping up a storm to Andrea Lavinthal’s (style director at People Magazine) commentary on Chris Harrison’s chat with Brooks, we had a bit of sass on Twitter Monday night. But the winner of the tweets has to go to @MKWonderland for her tweet below. Hat tip to you, @MKWonderland. Hat tip to you. 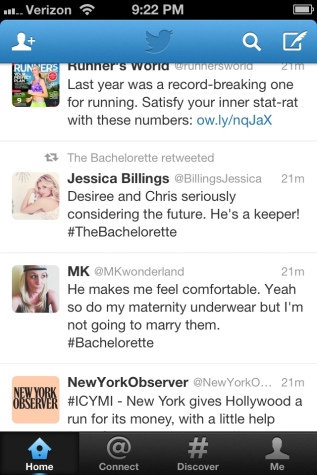 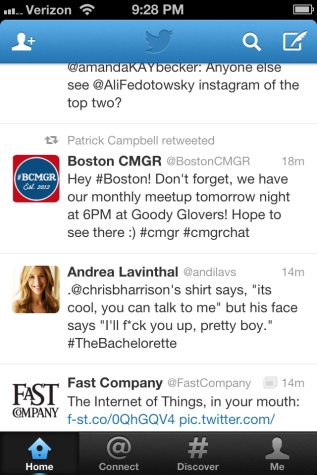 Desiree blogged about the finale part 1 on People Magazine. She ends with tune in next week to see what happens with “Brooks, [her] broken heart, and the other men.” Does this imply Brooks returns? I think he looked pretty set on peacing. I think the real question is does Des stay? But I’m conflicted.

The parts of her post you need to read:

Could get past this heartbreak to love either one of them as much as they both deserved? And would we ever get the opportunity to explore that? I promised myself from the beginning that I was here for love and not just to go through the motions. I had to remind myself that if I wasn’t feeling enough for the guys, I wouldn’t stay.

Stay tuned next week to find out what happens with Brooks, my broken heart and the remaining men.

Chris Harrison blogged his thoughts on Entertainment Weekly’s PopWatch. He wrote that Brooks put up a few warning signs even before this episode that he wasn’t falling for Des the way she was falling for him.

The parts of Chris’ blog you need to read:

He really wanted to be in love with Des so much I think he almost forced himself into doing something he would have later regretted…I don’t really think Brooks ever misled Des. He seemed to really struggle all the way through this. Maybe he could’ve come to this final realization earlier, but the fact is, it just never seemed to be there.

I’m stumped. So many questions. What are your thoughts, Bachelor Fans? Do you think Brooks comes back?

Next week, part 2. Break out the wine, Bachelor-themed baked goods, and maybe some tissues because this is going to be 3 hours of an emotional roller coaster: 2 hours of turmoil, followed by the After the Final Rose sit-down where all 3 of the men return to talk it out with Des.