I swoon every time Juan Pablo makes his C’s sound like S’s. (“Will you assept this rose?”) (Why yes, yes I will, as soon as I can pick myself up off of this ground.”) Swoon.

Who got kicked off: The one’s with Red X’s were sent a packin’. Fun fact: Victoria was sent home before the rose ceremony. Oh yes, the drama has begun…Group date. Check it. 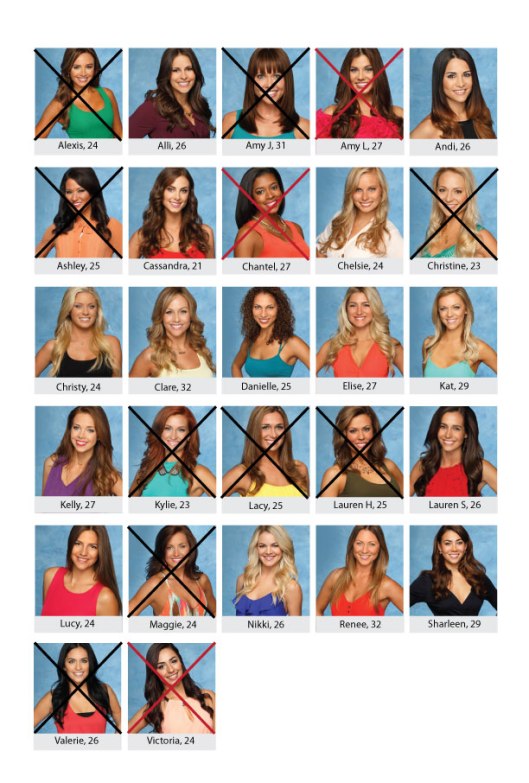 Juan Pablo blindfolded her (swoon again) and drove her to a winter wonderland in LA. Clare is adorable and fun, but man, sometimes all I want her to do is speak a little faster. Spit it out, woman. We’ve only got 2 hours of showtime. They romped in the fake snow that only LA can provide, ice skated (or rather torturously clamored around the rink), and of course finished the date in a hot tub. They also had their own private concert, where they slow-danced in their bikini and board shorts.

Meanwhile, back at the mansion, Free Spirit Lucy’s just chillin’ in the hot tub. Topless. With the ladies.

Kat used to be a dancer. Apparently to Juan Pablo, dancer equates to runner. He took her on a private jet to the Electric Run in Salt Lake City, Utah. Decked in neon, they completed the race and then were pulled onstage to rave. She received a rose.

I love when they do charity events. This time the date supported an animal shelter. The event was called Models and Mutts. All of the girls paired up with an adoptable dog, were given a costume to match their mutt, and then posed in a pic with said dogs and Juan Pablo. In true Bachelor fashion, there were a range of outfits from hot, flattering dresses and bikinis to hideous ensembles (where not even Heidi Klum could pull it off and look attractive), to of course the completely outrageous (as in no outfit at all). Kelly got the hideous outfit (bald cap, brown paint with white spots), while Andi and one of the blondes got the completely outrageous. Cardboard signs do not count as wardrobe.

“What do you wear under this?”

The stylist responds: “A smile.”

Umm…no. The blonde (I think it was Elise) traded with Free Spirit Lucy for a fire hydrant outfit. Lucy gladly assepted the nude ensemble. Andi was not so thrilled. She was fretting over it when Juan Pablo came to talk to her. He eased her concerns, by letting her know he’d be doing it too.

Kelly got the rose on the group date.

Finally! We have the token drunk. But she was not to stick around. Hot mess Victoria, had one too many cocktails, which led to some dry humping, bathroom-stall sitting, and lots and lots of crying. The crew put her up in a hotel that night and Juan Pablo went to talk to her the next morning. Her 24 years to his 32 years was painfully obvious, and he sent her home. Rightfully so. He has a family to take care of. Ain’t nobody got time for that.

Amy L. had some very awkward one-on-one time with Juan Pablo. She’s a news reporter in Florida, which she thought would be fun to role play with Juan Pablo. Errm. Not so much. She interview-styled him, and it was…different. (I don’t know what that is, either but it sounded good when I started to type it, so I went with it. Maybe we can make that a thing. Interview-styled. Or not.)

We also found out that there are two mommas on this season: Cassandra and Renee. Cassandra was a little worried about leaving her son, Trey, at home and already questioning if she should be there. Renee pulled her aside to comfort her, but it was Juan Pablo who stepped in and talked Cassandra through it, letting her know he wanted her there.

Anyone out there making Bachelor brackets? Any chance Elise could be the silent killer and come back and win it all? (Silent killer…sleeper…po-tay-to, po-tah-to…whatever they call those things.)