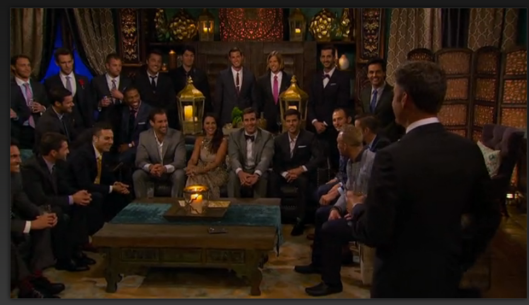 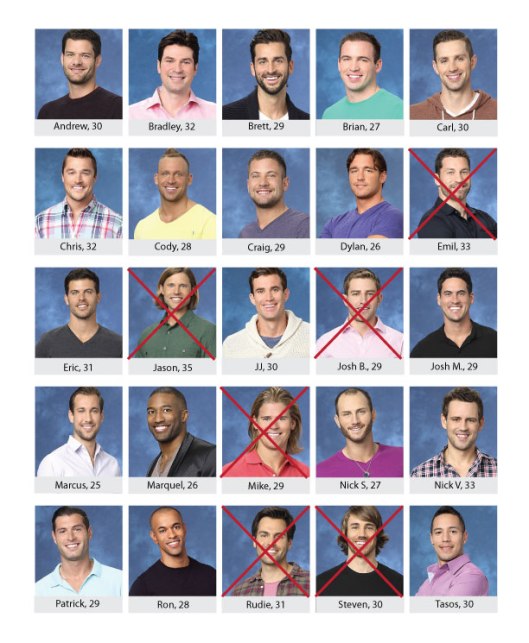 Personal trainer Cody came in pushing the limo. Like actually pushing the limo up the driveway. Craig came in popping bottles. Patrick the ad exec came in with a soccer ball. (As you’ll remember Andi was a dab hand at soccer.) Pro golfer Nick S. rode in on a golf cart. And Marcus came in looking like Ryan Gosling. 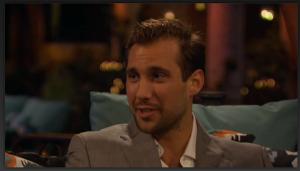 No, for reals. They are the same person.

Best Entrance: Lamp Man is my new favorite person. And yes, he will now be known as Lamp Man from here on out. His real name is Brett and he is a hairstylist. I’m a fan of his humor. When he exited the limo, he brought out a lamp. And not just any lamp. A standing lamp. From the hotel.
His introduction: “My mother always told me never greet a lady empty-handed.”
Andi’s response: “Did you take that from the hotel?”
Brett’s matter of fact response without hesitation: “Yeah.”
Andi: “Yeah, we’re gonna have to return that.”

First Impression Rose: The man who received the first impression rose was polka-dotted tie wearing, software sales man, that can really wear a suit, Nick V. Andi revealed in an interview that he wasn’t the typical man she went for, but found something intriguing about him when they had a little one-on-one time.

Quote of the Night: Pro golfer Nick S. rode up on his golf cart. After explaining the reasoning behind his chariot to Andi, she responded with a glint in her eye and, “I’ve got a little swing.” Nick S. was obviously taken aback. Andi: 1. Nick S.: 0.

Eric the Explorer: It’s heartcrushing to watch Eric Hill on the show. I’m glad they didn’t edit him out of the show, but it’s sad to watch knowing how quickly his life was taken. The very attractive and well-traveled Eric was killed suddenly in a paragliding accident prior to the airing of the show. He had finished filming with The Bachelorette, and had returned to his world tour when he got in an accident. The 31-year-old had set out to visit every country in the world, where he would have to experience both the culture (human element of the trip) and an exciting activity of that country (the adventure element). He documented his travels on a blog dubbed “The Global Odyssey,” as well as on Instagram. Upon his passing, Eric has inspired a new movement called the #LiveLikeEric foundation, which aims to promote philanthropy and cultural awareness and live in such an open, vibrant, and inspiring way as Eric did.

For his introduction on The Bachelorette, he brought two handmade dolls for Andi. He had gotten them in Peru in the Andes mountains. The people he had gotten them from told him to give them to his girlfriend. He didn’t have one at the time, so he brought them for Andi. At the start of the show, ABC did a tribute to Eric and dedicated the season to his memory.

Who are your favorites so far?

*I realize I’m a week behind. But I’ll be back in action next week with polls galore. Don’t you fret.