The group traveled to the captivating state of Connecticut last episode and spent their time at Mohegan Sun. Not gonna lie. This episode was a bit of a downer with Dylan unloading his past on Andi, Eric leaving, and Chris Harrison and Andi having an uncomfortable sit-down. Let me give you some of the highlights, so you don’t have to watch the whole episode.

Who got kicked off: Eric the Explorer and Tasos the Wedding Coordinator went home, leaving 11 men left to vie for Andi’s heart.

Sidenote: First, I’d like to begin with how fantastic are the Suave commercials for The Bachelorette? Scripted magic. They bring in previous Bachelor/ette contestants and have a scripted exchange with a hair dresser. Basically, they not-so-subtly sneak in what they’ve been up to since The Bachelor/ette (all living happily ever after, of course, with kids and the love of their life, etc.) and how they can get those luscious locks Andi has on the episode. They are completely terrible, and yet I cannot look away. Exhibit A.

One-on-One: Dylan went on a train ride. Technically it was an Essex steam train somewhat resembling that of Harry Potter’s transportation to Hogwarts. But let’s be real. He went on a train for his date. A train. At dinner, Dylan told Andi that being on the show felt unnatural and that she’d see the real Dylan soon. Sooo I’m just going to be dating the fake Dylan for awhile? Nah. I’m good. Dylan, that’s not how this works. You know we only film for 6 weeks, right? Time is a tickin’. I swear this is the second time I’ve questioned if the producers effectively debriefed this group about how the show works. Finally, Dylan’s walls came tumbling down, and he shared with Andi all about his past. He grew up in Connecticut (Coincidence? I think not.) and both of his siblings died of drug overdose. Andi gave him the rose, making sure to emphasize it wasn’t a pity rose. Well…we shall see if he makes it through another week.

Group Date: The men were met by 5 professional female basketball players and Andi. The boys played some hoops against the ladies, and by played I meant got their beautiful behinds handed to them. After the shaming, the boys split up to play against each other. As the Boyz II Men date was tailored to Opera Man, this date was tailored to Coach Brian. This was his jam. He’s a basketball coach in real life so he’s all up on that locker room whiteboard, giving his pep talk. “Hustle and defense win championships!” Clear eyes, full hearts, gentleman. Coach Brian led Team Rosebud to victory and in doing so secured extra time with Andi as the losing team was sent back to the hotel. During their one-on-one time, Brian showed Andi some of his moves on the basketball court. At one point he nailed it from half court! Nothing but net. While she didn’t get a kiss after that epic shot, Andi gave him the rose on the group date. Don’t worry. Spoiler alert. Coach Brian takes Andi back to the basketball court during the cocktail party prior to the rose ceremony and gives her a kiss then, telling her he regretted not doing it last time. Swoon.

Quotes of the Night:

“We’re running around like little infants and they are barely trying.” – Nick, Software Sales

“I really hope they have more game off the court than they do on the court, because she’ll have a real difficult choice.” – Lindsay Harding, Los Angeles Sparks

One-on-One: Marcus the Ryan Gosling look-a-like (which in all fairness I’m seeing less and less of as the show progresses, but I’ve already dubbed him as such so I’m sticking with it goshdarnit) received the second one-on-one date of the week. Turns out both Marcus and Andi are completely terrified of heights. So what better date than to rappel down a 100-story building? I can’t think of a better scenerio, can you? It was actually pretty cute. Marcus had to talk Andi down off of the ledge. He also talked her through her nerves as they first began their descent. Marcus distracted her with questions about her family. Her humor started to return as Marcus prodded and they slowly made their way back to solid ground. He asked her, “Are you a good golfer.” Andi responded with, “No, [pause] I think I’m better than I am.” Andi initiated a kiss as they were suspended mid-air. They both overcame their fear, the music swelled, and they shared in another passionate kiss.

The boys in the hotel room could see the couple rappelling down right in front of their eyes, and as sweet as they are, they pounded on that hotel glass, made a ruckus, and badgered the couple with “There’s no crying in rappelling!”

At dinner, Marcus told Andi he hadn’t dated anyone in 3 years, because his girlfriend left him and he wasn’t ready and he’s finally been able to open up to Andi, and you know the deal. The date ended with a private country music concert.

The Love Letter: Andi received a hand-written note from a “secret admirer” delivered to her hotel room. That’s it. We don’t know who it’s from. If I had to guess I would say Nick because he sent flowers previously. I mean just sign your name, dude. She only has so much time with each of you. What good is a note if she doesn’t know who it’s from?

Cocktail Party: At the cocktail party Tasos immediately stepped up to get some one-on-one time with Andi. And then stepped right on home. Sean Lowe (The Bachelor from 2 seasons ago and now married to Catherine Giudici) had a pretty great tweet in regards to Tasos being eliminated at the rose ceremony (see below).

The Drama: Eric told Andi at the cocktail party that he felt she was putting on airs when the cameras were around in certain situations. He straight up told her that he thought she was acting at some points. Prior to that they had both agreed their relationship was “stalling.” They just weren’t on the same page. Andi cried and Eric left in a taxi. 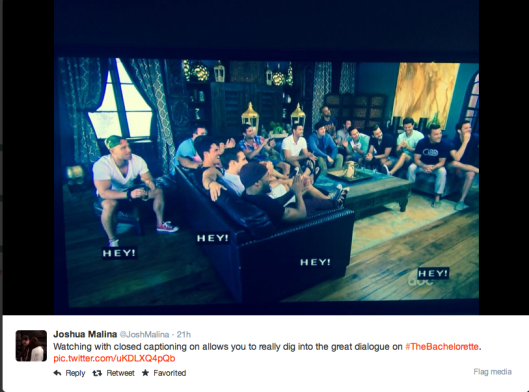 Kudos to Joshua Malina. That one made me laugh out loud.

The Rose Ceremony That Didn’t Happen: ABC chose not to air this rose ceremony. Eric was sent home this week after an uncomfortable tiff with Andi at the cocktail ceremony. Instead of the rose ceremony ABC had a sitdown with Andi and they talked about that night. It was…uncomfortable (to say the least). Cut to Chris Harrison explaining why they didn’t show the rose ceremony, just Eric leaving in a taxi. Then cut to a Bravo-like sitdown of Chris Harrison and Andi. No, what, no. This is…uncomfortable. Why are they talking about this? Why are they still talking? I don’t know how to feel.

I’m not sure what was going on, but I think that was just drawn out way more than necessary. I understand the need to be sensitive to the situation; however, I don’t think it warranted an entire Bravo-like hashing out of the episode. It could have been just Chris Harrison explaining why they didn’t show the rose ceremony out of respect for Eric, and then addressed the tiff at After the Final Rose like they normally do. Yes, it’s sad those were Andi and Eric’s last exchanges, but he knew her for 3 weeks. He had a life outside of the show. I don’t need you to draw it out in two different episodes for one week. Not cool. Just curious, what were your thoughts on how ABC handled Eric’s departure and passing? It’s a unique situation, to be sure, but I wasn’t thrilled with how it was handled.

In two weeks (Monday, June 16th at 8|7c) we pick up again. And the gang tries their hand (See what I did there?) at miming in France. Tonight, The Bachelorette will still air, but this episode will just be a rehashing of everything that has happened in the season. Because goodness knows we need more of that in our lives. According to Entertainment Weekly, ratings haven’t been great this season. And the numbers don’t seem to be improving. I don’t think another overused highlight reel is going to do the trick.

Extras: Following the episode Jimmy Kimmel issued a new challenge, which might make this season a little less of a downer. Andi has her own repeatable phrase for the season. As you’ll remember Juan Pablo had a tendency to say the phrase, “It’s okay.” Well Andi’s go-to is, “Stop.” Sometimes it takes on a low, drawn-out guttural sound, other times it’s a quick snippet. The challenge? Add it to your Bachelorette drinking games. Or don’t, because Kimmel’s montage seems to indicate you’ll be seeing the bottom of your glass sooner rather than later.