who didn't get a rose, who got kicked off, who is left on the bachelorette, who was sent home

The remaining 8 men and Andi traveled to Venice, Italy, where we learned who set up camp in the friend zone, that Josh is weirdly and suspiciously afraid of lie detector tests, and of Dylan’s questionable bathroom habits.

Who got kicked off: The ones with red X’s were sent home this week. Cody landed himself in the friend zone. And JJ just didn’t make the cut. I think he also found his way into the friend zone. It’s dangerous there, boys. 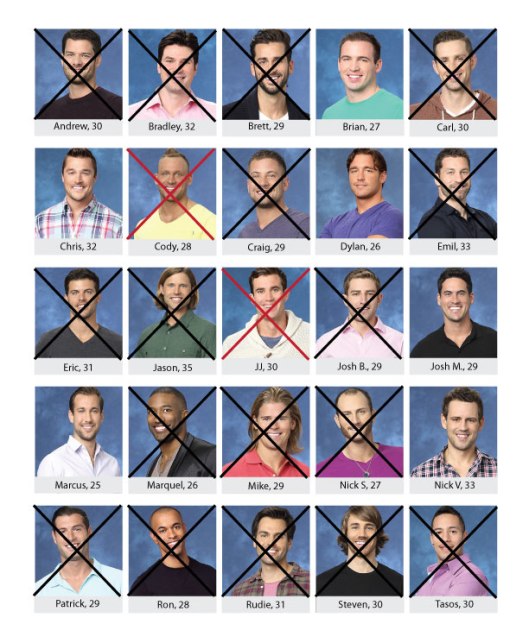 One-on-One: To everyone’s surprise and chagrin, Andi chose Nick (winner of the first impression rose strikes again!). She had a few questions from last week she wanted answered, such as why everyone hates him. In an interview with the producers, Nick divulged, “I sucked on the last group date.” I’m glad you recognize that, Nick. You did suck. One might even say you were a party pooper.

On the gondola ride, Nick addressed his party pooper status with Andi and all is well again in Nandi land. Andick? We’ll work on the celeb nicknames. As their gondola made its way down the Rio di Palazzo, Andi told him that if you kiss under the Bridge of Sighs you will have eternal love. Nick wasted no time in going in for the kiss.

Fun Fact: The Bridge of Sighs connects the Old Prison and interrogation rooms to the New Prison in Venice. Wikipedia told me that the Bridge of Sighs was “the last view of Venice convicts saw before they were imprisoned” back in the day. And that’s why it’s called the Bridge of Sighs. It was thought prisoners would sigh before their final view of Venice before being taken down to their cells. The more romantic explanation for the bridge’s name is that it refers to the lovers’ sighs when they kiss under the bridge.

Nick’s Speech: After Andi addressed the spat Nick had with the other men last week, Nick told her, “I feel incredibly fortunate to have the connection that we have. it is hard to imagine anyone else having that with you. I’m definitely falling in love. I know we have a long way to go.” I do not trust the salesman.

Group Date: So I know what you’re thinking. What is the best date you could possibly go on in Italy? If you said lie detector test, you would be correct! In the words of Chris the Farmer, “There is nothing romantic about this situation.” You are correct, good sir. The group walked into a room of armor and weapons to meet up with Andi and Italy’s finest lie detector administrators.

“This is kind of the worst date possible that I could have,” Chris the Farmer said in reference to the fact that he was the “secret admirer” sending Andi notes and it would be revealed. I agree this is the worst date possible (there has been a record slew of bad dates this season), but I think we consider it bad for very different reasons, Chris. Also, I have a confession for you. No one cares. No one cares you’re the secret admirer. You sent her a couple letters. I already forgot about it.

Test Administrator: “Have you had sex with more than 20 women?”

Test Administrator: “Do you wash your hands after the bathroom?”

Dude. Dylan. Lie. No one is going to know and if they claim you lied, you deny! Now we (being all of America) know never to shake your hand. Dylan, Dylan, Dylan.

When the results came in, the guys read Andi’s answers. She lied twice. Italy was not in fact her favorite country, and she did not think all of the guys were there for the right reasons. In a grand gesture to restore their trust in her, Andi decided to rip up the guys’ test results. Probably for the best, but I would have liked to know what other non-hand-washers there were in the group.

Cutest Moment of the Night: Coach Brian is finally stepping it up. On the group date he had Andi do their own make-shift lie detector test. He had her place one hand on his pulse and one hand on his heart. Andi asked, “Have you ever lied to a girl?” Brian responded, “No.” Andi asked, “Have you ever told a girl she looked good when she didn’t?” Brian responded, “Yes.” Andi followed up with, “So have you ever lied to a girl?” He laughed, “Yes.” Then they switched.

He asked her a couple softball questions, then followed up with, “Do you want to make out?” After Andi playfully denied the urge, Brian laughed and shouted, “You’re lieing!” Then reached out to kiss her. Adorable.

The L-Bomb: Houston, we have an L-bomb. “I’m in love with you,” Marcus told Andi. He also told her he had previously thought of leaving. So there’s that.

One-on-One: Cody finally got his one-on-one date. They spent the day in Verona, Italy the birthplace of Romeo and Juliet. Andi was looking for that romantic feeling, and she didn’t find it. They visited Juliet’s courtyard, the inspiration for Shakespeare’s Romeo and Juliet. It was also the inspiration for the film Letters to Juliet, which I think I picked up for $5 at Bed Bath & Beyond and have played it to death. If you haven’t seen it yet, do it. It’s terrible. I recognize this. But I absolutely love it, as do all of my roommates (despite what they tell you) who I have made watch it.

Andi and Cody get to do exactly what the main character Sophie does — help the Secretariats of Juliet respond to the love letters people write and leave in Juliet’s courtyard. Cody had a great response for a dude that had left a note about standing out in a group. It reflected his challenge of standing out in Andi’s crowd of men. I see what you did there, ABC. Cody’s response was sentimental and sweet. Andi let him go at dinner because he hit the friend zone hard. No rose for body builder Cody.

Bloopers: The best part of the entire episode had to have been the outtakes. ABC showed a montage of all of the boys answering a question for the lie detector that was a little misconstrued with the heavy Italian accent of the test administrator. “Have you fart in public?” Fought. Fought, boys, fought. All answered “yes” with a snicker, each earning a reproachful and disapproving look from the test administrator. It was grand. Just skip ahead to that part and watch it on repeat for 2 hours. That and Dylan’s honest answer of his bathroom habits. On second thought, I take back what I said before. This lie detector test may have been the greatest date yet.

We are quickly approaching hometowns, which are quite possibly my favorite dates to watch! Who do you think Andi will choose for hometown dates?