Tonight we find out which of the blonde ladies Chris chooses for his wifey! Then we get to see what happened After the Final Rose. If whoever Chris chose is in fact moving to Iowa.

Who is left: Fertility Nurse Whitney and Chiropractic Assistant Becca. Our Canadian Kaitlyn was sent home after the Fantasy Suite Dates. 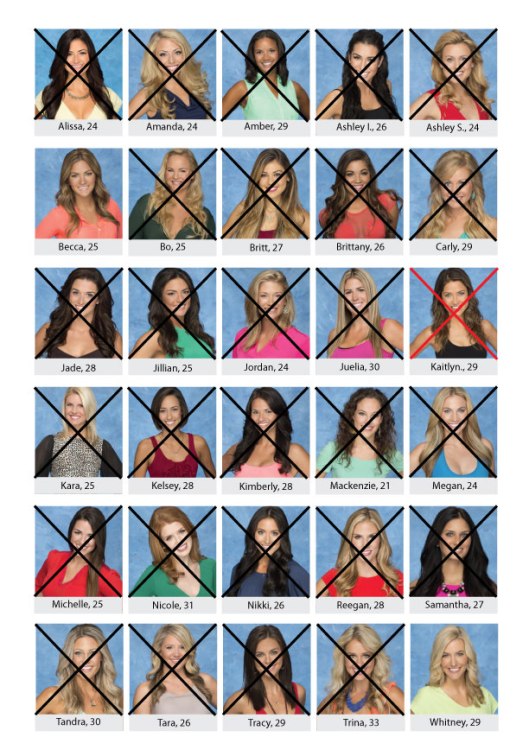 Bring ’em out. Bring ’em out. The Women Tell All last week was something. Jimmy Kimmel’s skit summed it up nicely. I don’t think there were any words there. Just unidentifiable noises and dramatic sobbing. Chris Harrison had a heck of a time controlling the verbal war happening among the ladies. What got the most attention however (that I could decipher between the bickering) was Chris Soules’ blog on PEOPLE.com, which is him looking back on each episode and giving you some of his reasoning. Can you imagine reading a blog on the thoughts your ex-boyfriend had about dating you? That’s what it is. And that’s what got some of the ladies heated up.

In the hot seat

Britt went in there with fire. She had everything that she wanted to say to Carly down and she let it fly. She also played the victim card spot on, while managing to list off her many accomplishments with volunteering and children. Kudos, Britt, kudos. Carly waylaid Britt’s accusations that Carly was responsible for Britt’s sendoff. “If you read Chris’ blog, I was the third to tell him,” said Carly. Britt burst into sobs like a gazillion times, because it’s the Britt show. And when they finally brought Chris out she gave him the longest hug ever. Let it goooo.

You could sense all the ladies wanted to have at her. It was a group ready to pounce, and they made no effort to hide it. When asked why she thought everyone hated her, Kelsey gave the same response of maybe it’s because she uses big words. I have a big word for you Kelsey. It’s called arrogance. It’s right in between annoying and nobody-likes-you in the dictionary. But you probably already knew that. Juelia made a great point, that she also went through something difficult, actually very similar to Kelsey and she didn’t use it to be a terrible person. But let’s all remember Kelsey’s story is amazing. She also told Chris Harrison this gem, “I felt that I became a whole person,” after a year after losing her husband. So naturally then she went on The Bachelor, because that’s obviously where you go to find love and mend a broken heart.

And here to save the day with some comic relief — zombie hunter Ashley S.! Thank goodness for her. Ashley S. is growing onions, maybe pomegranates. But really. She brought one to Chris Harrison as a “host gift.” See so thoughtful. All is right with the world. Chris Harrison, host gift in hand, admittedly said he was overstepping his role when he asked her then and there to be a contestant on Bachelor in Paradise. Ashley S., sidestepped the question, but the audience was on board. We’ll see what happens this summer. Goodness knows we could use some more Ashley S. in our lives.

Kaitlyn told Chris Harrison, “I can pinpoint the moment when my heart broke. When he called Whitney’s name.” When Chris Soules came out to talk to the ladies, Kaitlyn stayed put in her chair, talking from a distance, obviously trying to protect her broken heart. She just wanted answers for why he didn’t choose her, and Chris couldn’t give them to her. There is Twitter talk abuzz that Kaitlyn is the next Bachelorette. Canadian Bachelorette Jillian instagrammed a post of the pair, joking about the similarities. ABC is still polling its audiences, but we shall see if this firecracker gets a spot as the next bachelorette.

The Bachelor Bus is back! And so are gobs of women. I feel like they multiply each season. If you’re not familiar with The Bachelor Bus, it’s just a bus that takes Chris Harrison and the then bachelor around to various viewing parties. Just sorority house after sorority house. One had a drinking game posted on cardboard on the wall and made Chris take tequila shots. Now that is my kinda watch party. Another had a whole thing of hay in their apartment. Talk about dedication.

I’m so happy they have these. I love bloopers. First, they juxtaposed Chris’ laugh with that of a dolphin. Let me tell you. It was spot on. They also replayed the clip of Whitney’s dog humping a toy as Whitney and Chris were trying to have a deep conversation with each other.

Tonight! The previews showed Chris’ dad saying that he thinks Chris loves Becca, but that Whitney is the sure bet. He also asked Chris if he wanted a girlfriend or a wife. We’ll find out tonight as Chris takes these two home to the family.