Cameos of Bachelor rejects galore, still no rose ceremony (because who needs those?), and Nick V. is BACK. Kaitlyn and the bachelors packed their bags and headed to the very anti-climatic location of New York this week!

Who got kicked off: Clint is out the door. And just like that, the bromance of JJ and Clint ended. 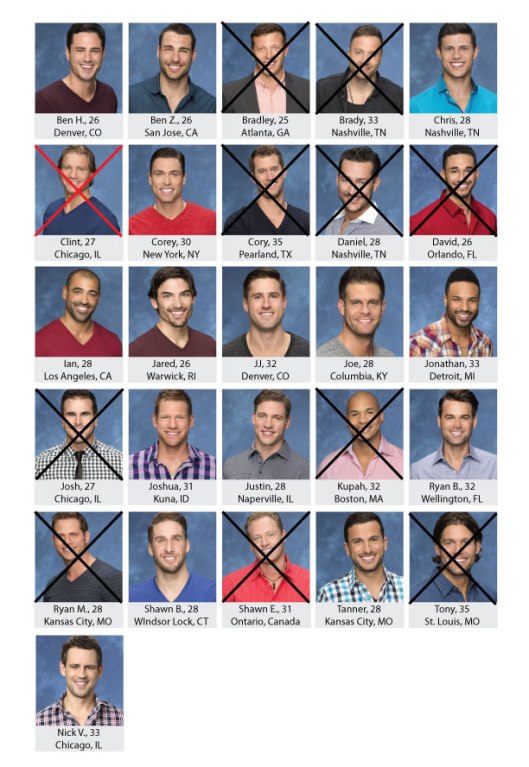 I missed most of this group date, but I’m sure the lyrics were cheesy and the good name of swagger was wiped through the dirt. It was the after party that was most important. Ashley Princess Jasmine from Kaitlyn’s season of The Bachelor was in the audience and when Kaitlyn went to say hello, there was also a surprise dude there. Nick V.! Nick as we’ll remember from just the last season of The Bachelorette (Andi’s season) called Andi out on After the Final Rose for sleeping with him, or rather “put her on blast” if we were to steal from my beautiful bachelor contestants words. The men seemed none too pleased to have that be the particular bachelor stealing Kaitlyn’s affection and coming into the house (or more accurately hotel room). I’m considerably questioning Kaitlyn’s taste in men. Let’s just take Benzi and call the whole thing off.

Nick V. told her he wanted to try to date her. Apparently they had talked a handful of times over text messaging. As Kaitlyn was wrestling with the decision to keep Nick V. around or not, he layed a kiss on her, y’know just in case she needed help making her decision.

At the after party, which took place on a boat, Kaitlyn told the men that remain that she was thinking about bringing on Nick V. to gauge their reaction. What do you think it’s going to be? Dude, no one’s going to like that, unless you’re weirdly understanding like Jared (you’ll see below). “I still don’t really know what I’m doing,” she prefaced before giving the rose to Justin. Justin was less than enthused. Ryan Gosling Look-A-Like had the best reaction to the news after downing his glass of beer. 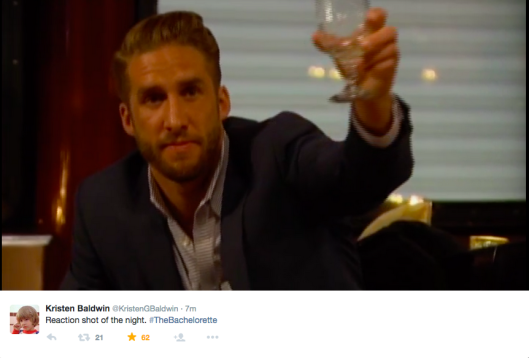 The Return of Nick V. AND ASHLEY S.!

Peace and order have been restored and all is right with the world. Ashley S. is back in action, styling Kaitlyn’s hair no less. I’ve missed that girl. A woman of many talents – zombie hunting, pomegranate picking…and even love advice. She let Kaitlyn know that that was lust she was feeling for Nick V., not love, so she better be aware of it. Kaitlyn was like yeah okay, and then made out with Nick V. in a park after she told him she was going to keep him. She said she would regret not exploring that relationship. I get it. There was chemistry. Whatever. Just please, Nick, if you’re going to be on this season, get a new cardigan. We all have to watch you.

Jared for some unknown reason got the one-on-one date. I could not figure out how he had made it this far, especially with his “Love Man” superpowers intro video at the beginning of the season. Then he gave a very sweet, reassuring speech to Kaitlyn that it was alright that she kept Nick around. Kaitlyn had been worrying about the bachelors’ reactions for her decision to keep Nick. Jared, love powers that he owns, told her it was her journey and if that was what she needed to be absolutely sure, then she should do it.

Then they flew away on a helicopter and Jared said he could see himself marrying her and that’s the night he fell in love. (I’m still questioning the editing on that one if that was in fact the moment or if they took creative liberties to slice and dice. Doesn’t matter! I’m on board that helicopter ride. Let’s do this!)

But really, could you see yourself marrying her? she just brought another dude back on the show. Like that day. Before you went on your date. You’re love man. I get it, but that can’t be good for your odds.

Kaitlyn planned a group date for them to perform on a Broadway stage. Her favorite show was Aladdin. As one of the men put it, “Kaitlyn likes to plan dates that we’re not good at.” After a long and painful date of the men singing and dancing, they found out that they were all going to be sent back to the hotel sans one lucky dude who would get to spend one-on-one time with Kaitlyn, actually starring in that performance that night. And by starring, I mean showing up on stage for as little as is humanly possible or bounded by their contract with the play’s producers.

Chris Cupcake Dentist man scored alone time with Kaitlyn after winning the Broadway auditions. But not before completely annihilating any chance he had of making it as a Broadway actor. The panel of Broadway producers were hilariously debating whether Chris’ audition for a part in the show was authentic or not. It was really comical to see them go back and forth on deducing whether he was making fun of the production, reeeeally trying, or just plain terrible. Turns out it was the latter, but he won for all of his A+ Dentistry effort.

The play’s director: “I don’t think he’s making fun of it. I think he just has no idea what he’s doing.”

Daaayum, Chris Cupcake has a bod. Remind me to switch dentists. 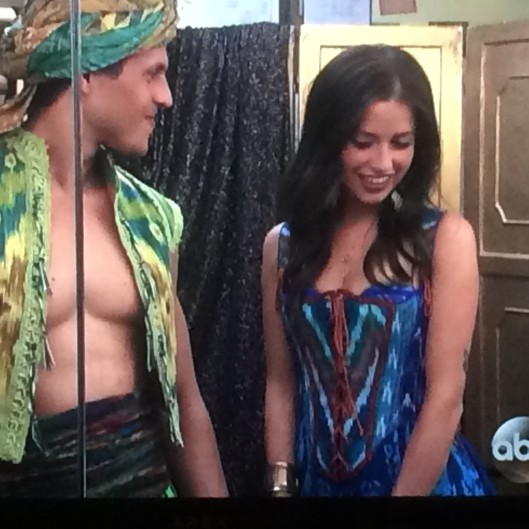 Chris and Kaitlyn got to star in a Broadway show for a hot second. And had someone escorting them on, off, and around the stage. The play’s director was probably like keep a strong eye on that one; we don’t want any audition repeats.

Again no more rose ceremonies. Kaitlyn chose to forego the rose ceremony at the beginning of the show after Clint’s departure. This was much to the guys’ dismay that she would not be eliminating JJ that night. Kaitlyn is not making popular choices with the men this season. It’s not Take Your Time season. that defeats the entire purpose of the show. 6 weeks to meet, date, fall in love, and get married. Get on board, Kaitlyn! I know we’re on this new “there are no rules” kick thanks to Chris Harrison last season, but let’s pull ourselves together.

No rose ceremony but we did see Nick V. preparing to enter into the hotel room with the other guys.

And for all you haters, Britt and Brady are still together. And it looks like we’ll get to have an update on their relationship every. single. episode. Really looking forward to that, said no one ever. At the end of the show Britt said, “I wouldn’t be dating him if I didn’t think I could be marrying him.” Orrr getting more airtime. Ryan Gosling Look-A-Like knows what’s up.

Tweets of the night:

Next week, maybe we’ll get a rose ceremony. Maybe we’ll get another helicopter ride. Maybe we’ll get to see a whole lot more of Ashley S. and return to the Mesa Verde. One can hope. What we do know is Nick V. is entering the hotel room and joining this season of The Bachelorette.