Dublin, Ireland is where we left off last time. All of the emotions and tears are happening, Benzi was sent home sooner than expected, and Chris Harrison is back to his old tricks of forgetting all of the rules. (The twist is so good!)

Who got kicked off: The ones with red X’s were sent packing. JJ left on a two-on-one where he was beat out by Joe. Beautiful Benzi and Tanner were sent home at a rare rose ceremony. (Didn’t know we were still having those.) And Chris was sent home brutally on a one-on-one that didn’t even have a rose on it! (Ahh, there we go, that’s more like it. Rose ceremony, shmoze ceremony.)

Single dad and the second half of the bachelor bromance JJ goes home to his daughter.

Joe and Kaitlyn sail away into the sunset.

Yep, that’s about it. All of the airtime was dedicated to Shawn B.

Personal trainer Shawn B. is having some struggles. If you’ll recall, he fell hard and fast on like week 3 and since then has been having a rough time seeing Kaitlyn build relationships with other men. I swear people forget what show they’re going on. It’s not called You Only Get One. It’s called The Bachelorette and those other people you’re living with? Guess what? They’re also dating the same person. Surprise! Shawn B. went to see Kaitlyn. Kaitlyn, tears everywhere, thought he was going to tell her good-bye. But he stuck around. He was seeking confirmation and validation in her feelings for him, which we’ll find out later she seems to think bites her in the booty.

Benzi and Tanner were sent home. Still no one remembers who Tanner was as evidenced by the fact that he didn’t even get an exit interview. Meanwhile, I’m working on my wedding proposal to Benzi.

Kaitlyn confessed to one part host, one part therapist Chris Harrison, “I do think things went too far with Nick. I feel bad that I have these relationships with these other guys that mean so much to me.”

So many tears. All of the emotions. The Bachelorette Show: 20 Kaitlyn: 0

What helped to start the waterworks was Ben H. bringing up some concern to Kaitlyn. Ben H. was like it upsets me to see you give validation to other guys to see you have connections with other guys. Then don’t go on The Bachelorette.

The show finally got to Kaitlyn. She got nervous when Ben H. brought up the fact that there was a visible change in Shawn B.’s demeanor after she gave him the validation he keeps asking for. Kaitlyn said, “I know I gave Shawn that reassurance…” But I’m gonna take it back now.

Kaitlyn went to Shawn and put him back on the verge of tears, telling him, “Let’s take a step back.” Yes, yes, let’s do that, because we only have a few weeks left. Excellent sense.

It got more drama-filled, but the overall takeaway is Kaitlyn is finally feeling teh affects of juggling more than one relationship. “I made mistakes. You can’t control everyone else’s feelings. I hurt people including myself.” Girl, don’t be so hard on yourself.

It’s Chris Harrison, author of The Perfect Letter to the rescue! Who needs rose ceremonies? Who needs fantasy suite dates? Who needs rules? Let’s make our own show. In all honesty I kind of like the new twist. And if physical chemistry is as important to Kaitlyn as she says it is, then she should love this change up.

Here is what Chris Harrison proposed:

He wants to “even the playing field” and  give off-camera time to the rest of the guys like Nick had. This means they want to skip straight to the good stuff. Instead of Hometown dates followed by Fantasy Suite dates, they are switching it around. Next week, 3 will go home leaving 3 guys for the Fantasy Suite dates. Then from there, there will only be 2 hometown dates.

After that was announced to the guys, each guy got a one-on-one date with no rose on it. But that didn’t mean they were staying.

One-On-One: Chris Cupcake Dentist man was left stranded on the cliffs. There was one moment all of America jumped out of their seats reaching at the television shouting, “Don’t jump! Don’t do it! It’s not worth it!” The crew was filming awfully close to the edge and at one point Chris crumpled to the ground sobbing with a crew member uncomfortably jumping to aid trying to assess the situation.

Quote of the Night: “She deserves a lifetime of happiness and I’m not sure she’s ready to find that yet. Just looking at her, she’s a mess.” Listen, Chris. If I had to choose only one man between 25 incredibly attractive men, I would be a mess too. Let’s cut her some slack.

Twitter was great Monday and I almost let it do my recap for me. How can you go wrong, when someone brings back the Kelsey stare. Hat tip to you, Robyn Ross. Hat tip to you. 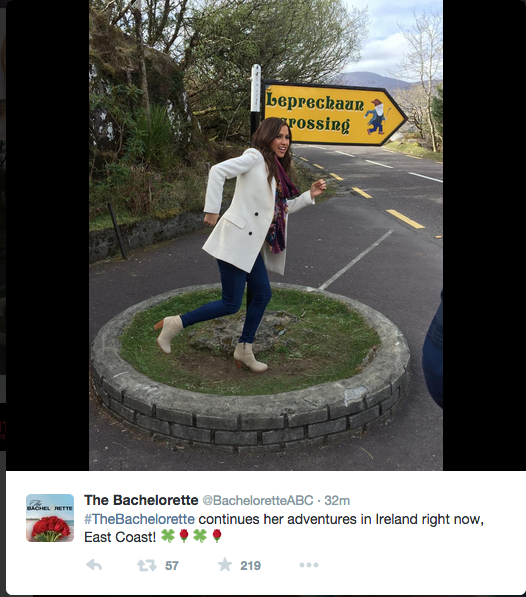 How do you feel about the new structure? Fantasy Suite Dates and then only two hometowns?