The group traveled to Killarney, Ireland this week, a small western Irish town. Shawn B. has selective amnesia and has conveniently forgotten Nick’s name, and Joe went out in grumpy fashion.

Who got kicked off: The last of the J names, Jared and Joe, are on their way home. Jared was let go at a rare rose ceremony, and Joe was dropped on a very awkward group date after professing his love for her.

Ben H. had the one-on-one. They went on a row boat. Kaitlyn told him all of her stresses, and Ben calmed her. Kaitlyn suspected he was a virgin because he’s so nice. For the record those things are related. If you’re nice you’re obviously a virgin. (Please sense the sarcasm.) And the spotlight on Kaitlyn’s love life remained.

Ben H. told Kaitlyn he thought he was “unloveable,” because he was so heartbroken over his last long-term relationship. The Twitter world blew up with professions of “I’ll love you, Ben!” and “That’s crazy talk!” Safe to say, Ben H. is a strong contender for next season’s Bachelor hunk.

Joe told Kaitlyn he loved her. And Kaitlyn was like oh man we gotta nip this in the bud right here. Just as Joe confessed his love for her, telling her he was in love with her, Kaitlyn told him they are not on the same page. Then things got awkward. Joe shut down and understandably got upset. Soooo he went home.

Next on this group date of uncomfortable emotions, Kaitlyn sent Nick back to the hotel while she had some one-on-one time with Shawn to drop a huge bomb on him that she slept with Nick. Shawn took it as best he could. He had to walk away for a bit, but came back and told her he still wanted to stick around.

Shawn B. sought out Nick’s hotel room. All that was accomplished of that was that he confronted Nick with what Nick already knew: Shawn doesn’t like him. Fun fact: Shawn B. kept calling him “The Other Guy” throughout the entire show with his interviews with producers. Great because there are still like four other guys on the show, and it’s not as though his name is Lord Voldemort.

Fantasy Suite dates have started. Nick got the first Fantasy Suite because we already know they’ve done that. Also, we got to see the morning after in the hotel room, which I can’t ever remember The Bachelor showing. Another first! I think Nick’s sole purpose on both Andi’s season and Kaitlyn’s season is to expose the back scene secrets of The Bachelor and what really goes on off camera. Not like we already didn’t know that.

Tweets of the night: 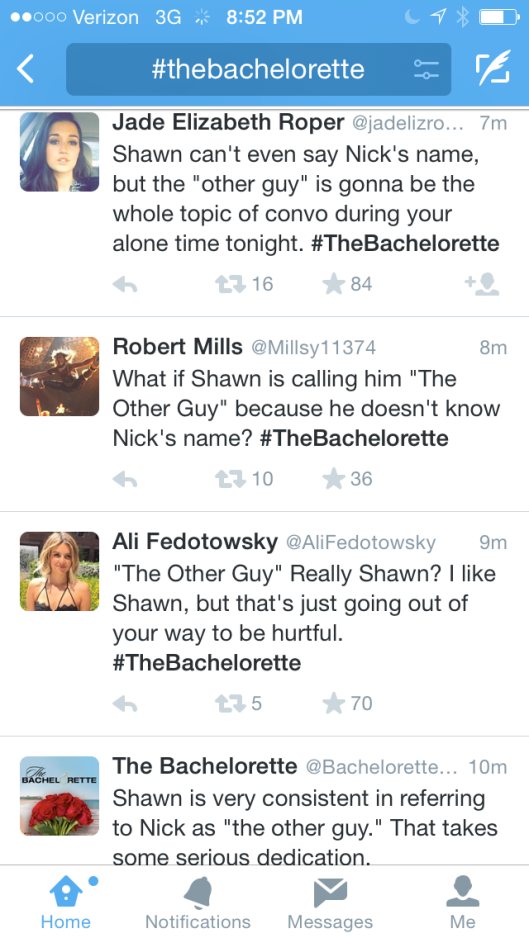 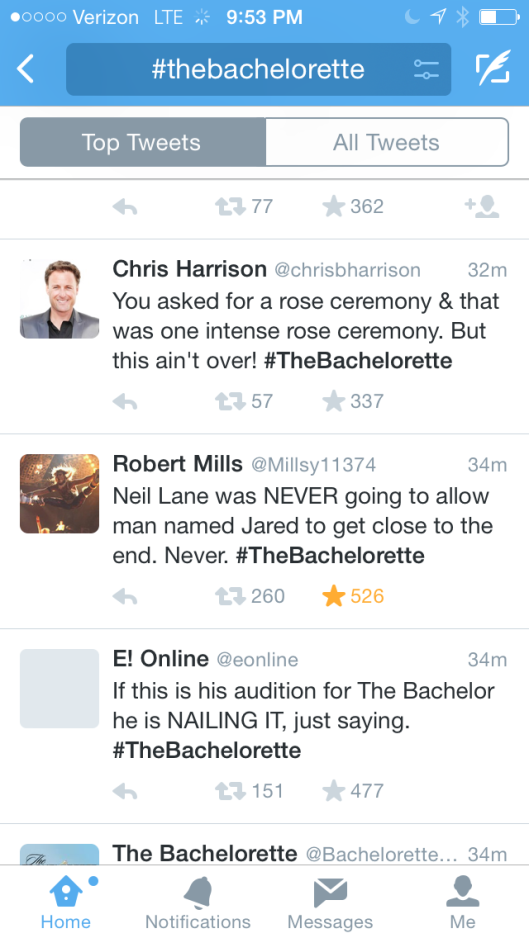 I am a major fan of Possessionista. Her primary purpose is to identify all of the most-loved styles of the show, but her sharp-witted observations will give you a chuckle.

Kaitlyn Bristowe’s Bachelorette Blog on PEOPLE.com is a fun read. She talks about compartmentalizing the relationships, ALL of the emotions, and sex with Nick Viall.

According to Chris Harrison’s blog, we’re about to get the top blown off of this pressure cooker. Next week! Shawn B. and Nick are gonna have it out and Kaitlyn is going on the rest of her Fantasy Suite dates.