Jamaican me crazy. I love you’s all around. Because why not. Somebody bring back awko-taco! Sea turtles trump ocean pigs any day.

Ben traveled to Jamaica for his Fantasy Suite dates with Caila, Lauren B., and JoJo. He told two women he loves them…multiple times. If you skip ahead to the photo you can guess that the only one who was not on the receiving end of an “I love you” was Caila.

Who got kicked off: Caila was given the boot after Fantasy Suite dates. After she surprised him before the rose ceremony. It was uncomfortable. 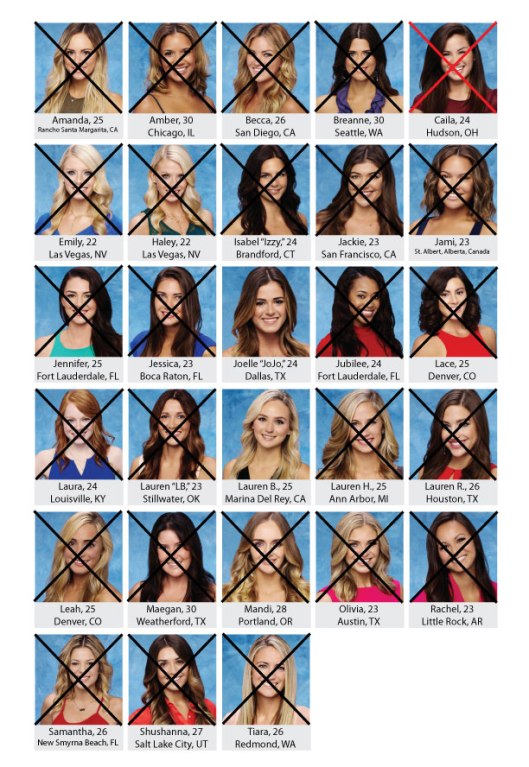 The gist: Caila is just too happy for Ben. He can’t break down her barriers. The start of the date was weird. They were on a raft, without a cameraman mind you, and they were not talking. Caila was in her head worried about the date and Ben being with the other ladies. Ben was wondering what was up. Caila told him at dinner she loved him. Ben didn’t say anything back. They went to the fantasy suite.

What Ben said about Caila:

“Caila is always smiling. I want her to open up.” 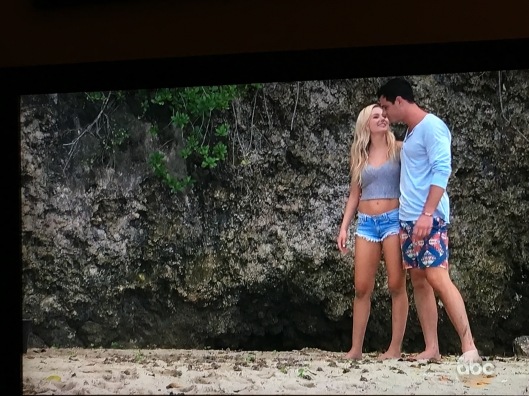 Ben took Lauren on the cutest date in the history of Bachelor. But like for reals. They helped hatch baby sea turtles and free them into the ocean. Granted, about 1 in 1,000 of those will actually survive to full adulthood, but still, the cutest. And not just because Ben deemed it so. I’m booking my trip to Jamaica immediately. Turtles trump ocean pigs any day of the week. Fact. Lauren B. and Ben also prayed over the bucket of sea turtles before sending the baby sea turtles free into the ocean.

They went to dinner and dancing. Lauren B. told him she loved him. Ben got crazy with saying “I love you” back to her about a bajillion times. I’m positive. I counted.

What Ben said about her:

“Lauren B. is the closest thing I’ve felt to love at first sight.”

“I look at her with googly eyes.”

“There are still questions, like ‘how as a dude not scooped you up?'” Okay, first of all this is a stupid question. Why are you on The Bachelor, Ben? Why haven’t you figured out why the pot is calling the kettle black. Why are you trying to ruin my bracket?

Ben took JoJo to a secluded waterfall where they could jump into the water and metaphorically into their new relationship. JoJo told him she loved him, saying she could only picture the future with him in it. Ben looked her in the eye and said, “JoJo, I love you.”

They went to dinner. JoJo called him out on the fact she was surprised he said it back. Ben said he said it because he knew how he felt. Do you, Ben? DO YOU? You told both ladies you love them. (I’ve already forgotten about Caila.) I feel this is going to cause you trouble come choosing time.

What Ben said about JoJo:

“I feel very confident around JoJo.”

“I’m more myself around JoJo than any other person.” *Not completely factual. Something like that. Close enough. Stop judging.

“She opens up a whole new side to me. One where I can laugh more.”

“Your brothers scared the ish out of me. But it’s cool.” *Okay, so again, Ben didn’t say this exactly, but I think we can all agree this is what he was thinking. 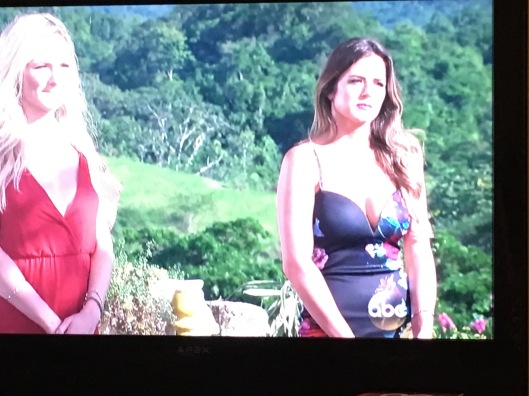 The producers must have convinced Caila that it was a good idea to see Ben before the Rose Ceremony. Caila said she knew Ben was waking up with these other girls, but she wanted to be who he woke up to for the rest of his life.

Magically, she was provided a car and given the exact location of where Ben was staying. Because that’s a thing. (Sense the sarcasm.) There was super awkward footage of her sneaking about trying to surprise him. Then when she did find him, the surprise was on her. Ben sent her home.

Her speech became even more stinted as she couldn’t find the words. She did finally put some vinegar in her words when she told him, “That sounds like a line,” after he told her it was hard to imagine saying good-bye to her.

She got in the van. Got out of the van. Had more stilted conversation as she tried to get answers. She told him she did love him. They hugged. And she left heartbroken. It was sad. Hey, maybe she’ll meet the love of her life on the airplane home. It’s worked before…Too soon.

JoJo tried to make light conversation with Lauren B. Lauren B. was super anxious and not about it. Caila obviously wasn’t coming to this party. Ben handed out both roses. They all came in for an uncomfortable group hug. Then had champagne. Cheers. Cheers. Cheers. How can we make this moment less uncomfortable? I know! Let’s cheers to something. JoJo toasted first. Then Lauren B. Then Ben. To love! To meeting Ben’s family! To love! To uncomfortable situations where I’ve told both ladies that I love them and I’m hoping they aren’t able to tell. Supes fun.

Best Commentary From My Friends of the Night:

I’m starting a new category. I have funny friends. Their commentary should be documented. First up, Katie. (Disclaimer: She knows I’m putting this up. Disclaimer disclaimer: I told her I was putting up something.) 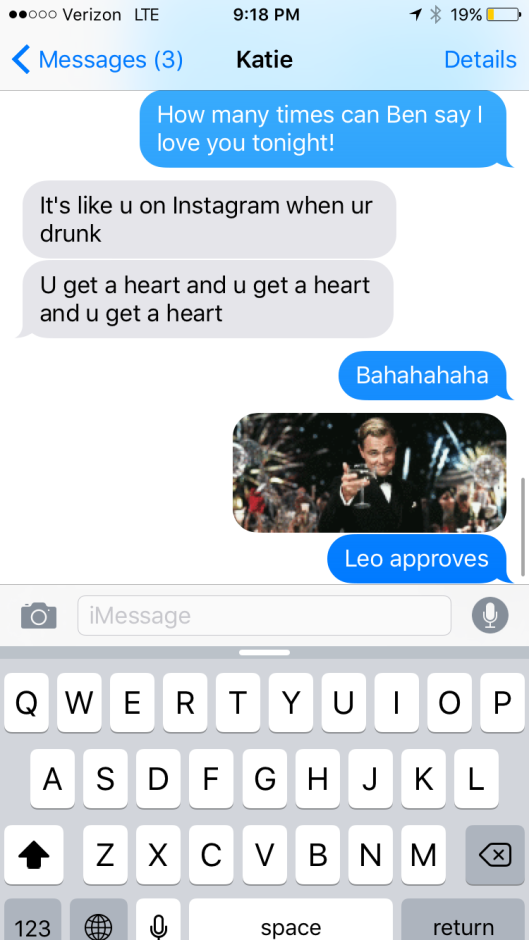 *Completely unrelated sidenote: I hope you all watched the Oscars and your tiny, adolescent hearts cheered in mini-backflips for Leo finally taking home the Oscar. Just to be nominated. My heart will go on.

Women Tell All is next week, followed by the finale. Women Tell All is like the poop of the season. It’s like the previews in the movie theatre you have to sit through before you get to the good stuff. No one really wants to watch them, but you sit through it anyway, jealous of the ones smart enough to come in late, because that’s what you do for the people you love. I love you. And I love you…