Luke and JoJo are heating things up. James Taylor lost his confidence. Derek had an entire ballad sung in his honor as he exited.

After a two week hiatus, The Bachelorette is finally on tonight!

A little prep from two weeks ago in case you can’t remember, the group got hot in Buenos Aires, Argentina. 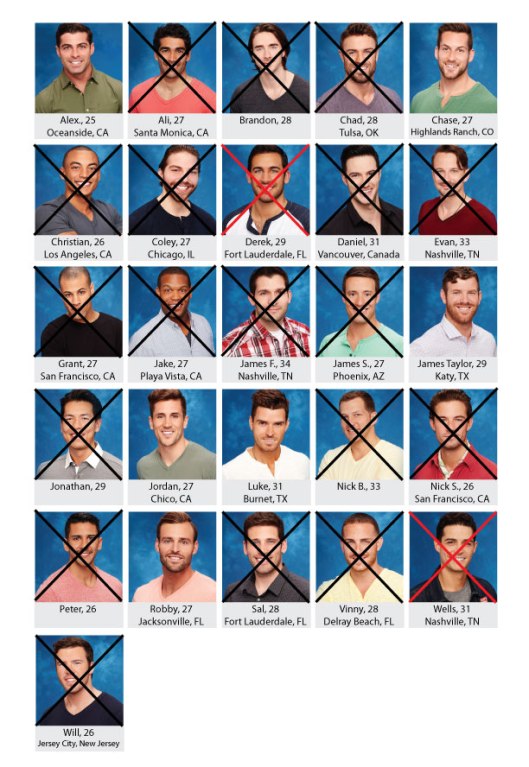 One-on-One: Wells got the one-on-one but not the rose. Wells announced to the group that he was the only one that hadn’t kissed her, which all of the guys took to mean, let’s make fun of him mercilessly like high school all over again.  On their date, Wells and JoJo went to a bath. I mean a show called Fuerza Bruta (Brute Force) that was actually pretty cool, where they were suspended in midair in a water net. Finally Wells laid one on her. JoJo felt they were just friends and that kiss kinda sealed the deal for her. At dinner she called him out on his realistic view of love and let him go. And not only that but told the camera that while that kiss changed things for Wells it did for her too but not in the same way. Ouch.

Two-on-One: In an unprecedented day in Bachelor nation, they added another two-on-one date. (Turns out later JoJo was like screw that immagonna ask for another rose to keep everyone.) Derek and Chase were put on the two-on-one in an awkward tango situation. 1. Because the instructor had a slit up to there and 2. Because JoJo was uncomfortably not into Derek. The reason Chase was on the date was because JoJo was uncertain of how he felt about her. Chase dissuaded her concern and JoJo was like yes, you’re hot and look like all of my frontrunners. Yes, you’re a keeper.

slit up to there

Group Date: The group wandered around Argentina and played an “impromptu” game of soccer with the locals. Look how cool we fit in. Jordan scored a point. Luke was looking hot. Even James Taylor made a play despite his insecurities that were running full force this episode. Someone give that man a guitar.

Quote of the Night: Goes to Derek. After a string of “freakins,” which felt very out of character for our Dunder Mifflin Jim, Derek asked himself:

Why am I crying?

Don’t Cry for Me Argentina swelled in the background as cuts of Derek sobbing and JoJo and Chase happily dancing appeared. This went on for five minutes. Five minutes of a two hour show dedicated to this sendoff. I timed it.

James Taylor: James Taylor lost all of the confidence this episode and called out to JoJo that Jordan came off as entitled sometimes. JoJo brought it to Jordan’s attention and there was some awkwardness amongst the men’s bromance.

Luke: Luke and JoJo had a make out session that made all of America hot and bothered. If you only watch one part of that episode. Go here. You might have to fast forward through all of Derek’s exit. But don’t because that’s great in too.

Going into the rose ceremony Luke and Chase already had roses. JoJo called Robby and Jordan her jocks. James Taylor and Alex were the last men standing as JoJo held the final rose. Then in a dramatic turn JoJo asked for a minute and ran down the steps out the door. JoJo told Chris Harrison she couldn’t hand out the final rose. But TWIST! Back at the rose ceremony JoJo said she was struggling making a decision and Chris Harrison brought in two roses. Everybody wins! Well, except for the guys that looked pissed. But whatevs! Roses all around! There are no rules.

Can we also just talk about how hot this dress is.

Jordan talks about his feelings towards JoJo. JoJo’s eyes lit up when he started talking about the future.

Tonight on The Bachelorette we’re getting ready to whittle down the playing field for hometowns! Hometowns are expected to air on July 18th.

What I wanna know was who was she going to let go at that last rose ceremony?

Who’s making it to hometowns?