“I love you.” “Thank you, but…” You can go home now. Unless you’re Robby or Jordan, then you can stay.

As soon as you reveal your feelings of love to JoJo (read: unless you’re a jock and/or kinda sketchy) you will be immediately shot down and asked to leave the premises. Luke drew a heart of flowers for her in the grass. Chase has never told anyone that he loves them. Wells had never kissed her. All of them she told them she didn’t feel the way she was supposed to feel when they uttered those words. Let’s just forget about the fact that Robby dumped his ex-girlfriend immediately before coming on to the show.

Who got kicked off: Luke was sent home at the rose ceremony from last week and every woman’s heart broke. Except not, because now Luke is back on the market! Next bachelor anyone? Chase was giving him a run for that next Bachelor spot though by coming back to apologize to JoJo after she mercilessly ripped his heart out and sent him home as they were in the fantasy suite. Gunning for that next Bachelor spot. Needless to say, JoJo didn’t keep him. She always starts her rejections with “Thank you, but…” Chase was like my heart is still open to you. And JoJo was like, “Thank you, but…” immagonna keep those two other guys destined to crush my soul. 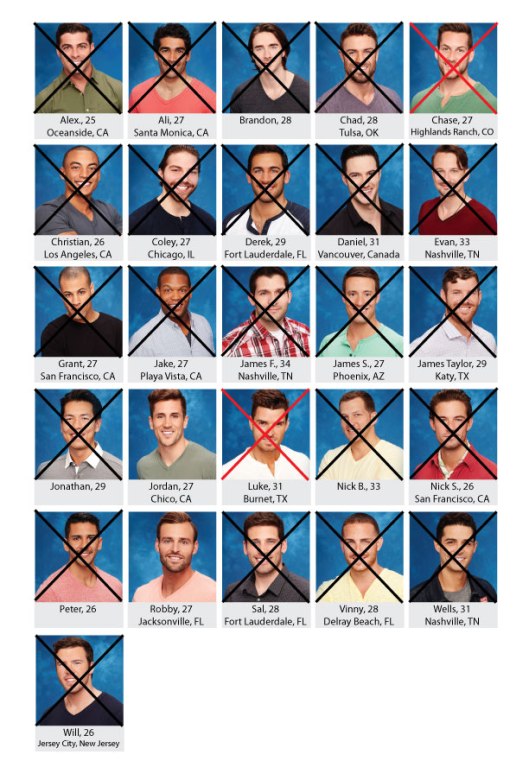 Bachelor in Paradise airs August 2nd. Thank goodness. Something to look forward to this summer. Because Jubilee is back! As is the Ashley I. and Jared saga! So. Many. Fun. Things. Also, don’t forget! The Men Tell All aired last night. We have the finale coming up next week, so buckle up.