Fantasy Suite dates in Finland have arrived! ABC keeps trying to make us second guess will he or won’t he take the ladies to the Fantasy Suite to make sweet suite love. By now we’ve seen Nick on this show four times. It’s not really a secret.

Who got kicked off: Corinne was sent home in a very rare rose ceremony. Nick called Vanessa last and after he handed the rose out, Corinne broke down immediately into tears. We only cry in the limo ride, Corinne! And in good ol’ Corinne fashion after she entered the limo and finished an interview, she promptly took a nap. I mean Lincoln took naps. Michael Jordan took naps. You do you, boo.

She’ll be fine. Nothing a little cheese pasta can’t cure. I’m sure those tears will be promptly wiped away as soon as you can say Bachelor in Paradise. Finally, next week, Chris Harrison reclaims his glory in Women Tell All. We’ve missed you good fellow.

Andi coming back was a fakeout. She was just a producer ploy that they brought back to have her check in with Nick on how his dates were progressing. No chance these two were getting back together. But they made amends from that time long ago and Andi went on her stylish way.

Raven They didn’t show all of Raven’s date because it was only an hour-long Bachelor episode this week. But we did get enough air time to find out Raven has only been with her previous boyfriend and never had an orgasm. Sooo there’s that. Raven likes to share. Next week we’ll find out how the Fantasy Suite date went for the two of them and see Rachel and Vanessa’s dates.

“With every step of the way you’ve made it easy for me to love you.” – Raven and a hallmark card out there somewhere

When in Finland do as the Finnish do. Can we all just take a moment to appreciate this sweater? I mean it must be cold in Finland. Just look at Raven’s shoulderless top. 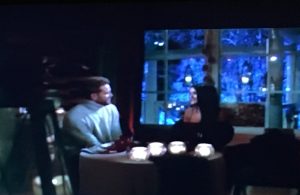 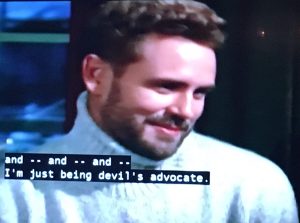 Author’s Note: I still don’t know how to turn off captions on my television. So you’re welcome

Also, Fun Fact: PEOPLE.com confirmed Nick Viall is going on Dancing with the Stars March 20th. Have you learned nothing from Chris Soules? That is not how you keep a fiancé! Though, Nick might not care about that. He told Andi, just because he was on The Bachelor did not mean he was going to get down on one knee and propose. If we have another Juan Pablo sitch on our hands I will revolt!

Next week is a 3-hour special. First we find out what happens with the rest of those Fantasy Suite Dates and then we bring back the ladies for Women Tell All. So get those wine fridges stocked and ready!