In case you need a refresher or haven’t heard of CitySTRONG (#yourCitySTRONG), Shawn Booth and Kaitlyn Bristowe and Erin Oprea (personal trainer to Carrie Underwood and responsible for her legs) are rolling into cities all over the US to bring group workouts to the people. A portion of the proceeds go to CreatiVets, a nonprofit aimed at providing a creative outlet to vets as they come back from war and acclimate to society with challenges such as PTSD. 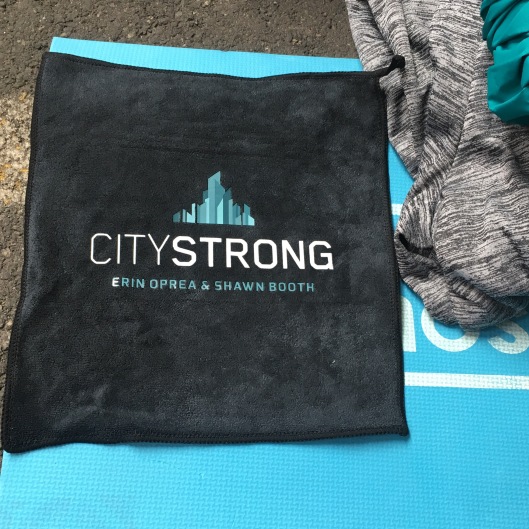 I found out they were coming to Boston the night before so naturally I didn’t even think twice. I immediately bought my ticket. $40? Whatever Shawn Booth and Kaitlyn Bristowe are in Boston. And it’s two of my favorite things! Working out and The Bachelor. I am in!

As I was walking to the event around 10:30am (They were like doors open at 10am an hour before and I was like an hour? Nah man, I’ll see you there.), I ran into another girl with her yoga mat strapped to her shoulder. We were looking for the building, and started chatting about how her cousin was already there and that there were a bunch of people there. Which was a relief, because honestly I didn’t know how many people would come and I was half thinking I would be the only one and would have to decide between a refund of my $40 well spent or a personal training session. My new friend told me she had tried to get the VIP tickets for $75, but they were sold out before she could get them, and I was like what now? They have $75 tickets? What do they give you? A liver? My new friend immediately ditched me as we checked in.

They gave you a mini towel when you walked in and a wristband to identify VIPs from regular admission. I don’t know what the VIP tickets include because I was late to the ticket purchasing party, but I can only assume it gets you additional time with the Bachelorette stars, unlimited photo ops, and possibly brunch, maybe wine. (I’m hoping a VIP attendee and/or the CitySTRONG stars can chime in here.)

I’ll admit I walked in super skeptical. And a bit of a ‘tude. They tried to pump us up with push-up competitions beforehand and I was like OK let’s see what this is all about. Can this really be that hard of a workout? Then Kaitlyn and Shawn came out and my facade came down and I completely fangirled.

Kaitlyn drank rosé the whole time, and served as the comic relief in between breaks.

The workout was Tabata style. Tabata training is a type of high-intensity interval training (HIIT). It has eight rounds of ultra-high-intensity exercises for 20 seconds on, 10 seconds off interval. A lot of glutes and lunges and squats.

They really wanted you to get some merch. Pro Tip #1: So if you go, get your CitySTRONG tank, t-shirt, swag BEFOREHAND and wear it during the workout. People with cameras will take your picture, you’ll likely get on stage and Kaitlyn and Shawn will seek you out during the workout.

They also paid attention to the VIPs. From what I could tell, they were the ones in the front. But Shawn and Kaitlyn did come into the crowd to do parts of the workout. So no one in the back was forgotten. And all of the three boys that were there could not hide.

AND Shawn Booth came through the crowd straight through by my mat. I nearly died. I refrained from tackling him. Because I mean Kaitlyn was watching, obviously. 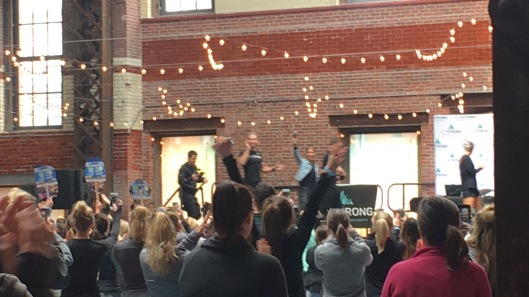 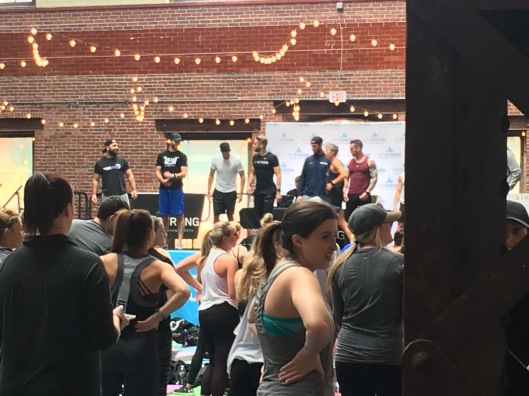 My favorite part though. The five guys that were forced to come by their girlfriends’ demands were brought to the stage and they did up down push ups for a competition. Just for pride, and to give the people on the mats a break.

All in all, Kaitlyn was charming, Erin Oprea and Shawn Booth are badass, and the hour and a half flew by.

The workout was SO FUN, and I can tell if either one of them was my personal trainer, I would be singing Before He Cheats on stage looking like I eat nothing but kale for breakfast and eggs for dinner.

My key takeaway was that if I do this workout, I will look like Carrie Underwood. Kaitlyn and Shawn are still a couple of my all-time favorites. I regret not getting the merch.

Go to CitySTRONG, get the Merch.