Season 13 of The Bachelorette with Rachel Lindsay has begun! Also known as Chris Harrison’s redemption season. Chris Harrison had his time to shine tonight! Take that Nick. Chris Harrison got to introduce the show. Rachel’s dress was banging, the introductions were entertaining and every man was fighting for her attention.

Who got kicked off: Blake K., Kyle, Grant, Jedidiah, Milton, Michael, Mohit and Rob There is only one requirement this season. You must be from Florida. 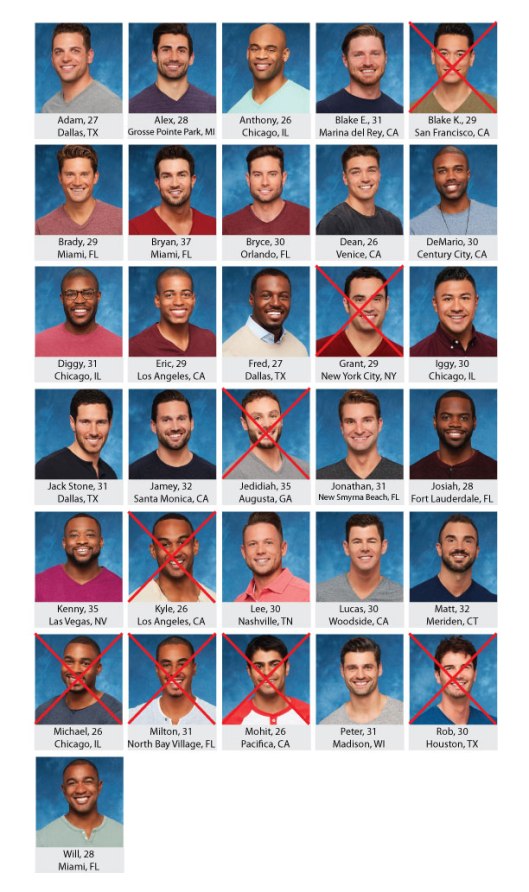 Rachel brought back her very closest friends. Every lady from last season. Raven is back! As is Corinne, Jasmine G., Kristina, Left Shark, Whitney, and some girl I have no recollection of.

Raven’s advice from last season, “You just have to let yourself fall.” And she let Rachel know that Rachel’s great quality was that she pulled out the best in all of the ladies that were there.

Kenny the wrestler has a 10-year-old daughter. “I’ve been around a lot of rings in my life, but maybe the next ring that I touch is Rachel’s.”

Jack Stone is a lawyer from Dallas, TX who lost his mom to cancer and he has a dog.

Alex is a coder disguised as a gym meat head and his parents are pretty adorable.

Diggy owns more shoes than all of the women of Los Angeles. 500+ and counting.

Blake E. is a personal trainer and a sports nutritionist with a self-proclaimed higher than average libido, which he attributes to his heightened levels of testosterone. So there’s that. He talked about how he was great at sex, but there’s more to a relationship than that, citing they still have to like them, “You still have the other 23 1/2 hours of the day.” I’m not even gonna touch that. TWSS.

Lucas brought a megaphone, a t-shirt and a catchphrase. He announced himself before emerging from the limo, saying, “With one testicle larger than the other.” Rachel responded with, “Good to know, good to know.” Rachel plays along with everything. He did later narrate one of her one-on-one’s that was pretty funny. He is quickly rising to the most annoying guy on national television for his catchphrase Whaaboom. Someone grab that megaphone immediately. The guys were gathered in the house getting to know each other and trying to figure out who the obnoxious one was going to be. Then Lucas entered. “That’s the crazy one,” one of the guys announced and chuckled. “Did you guys drug test?” – Josiah

The Play on Words Offenders

Matt the Penguin (who wore a penguin costume for no other reason other than because he heard at one point Rachel liked penguins): I’m gonna waddle right into her heart.

Grant rode in the back of an ambulance, and jumped out of the back shouting, “I heard there was a woman who has been bored to death.” Rachel played along, shouting “Save me! Save me!” She likes those fun, engaging interactions.

Mohit held her hands with his hands slightly higher, saying, “I just want you to know this is the only time I will have the upper hand in the relationship.”

Bryce announced, “I want to show you my buns,” and then pulled out a basket of buns and cheese.

Brady the male model brought a sledge hammer. Yes, a sledge hammer. And some giant ice cube wrapped with giant rope that looked like he just walked out of a Frozen movie. He set the ice down, hit it with the hammer, and said, “I just had to break the ice.”

The Four Guys She Already Met

Dean, as we’ll remember, is the one that announced to a live studio audience, “I wanna go black and never go back.” This time he brought a mini sand pit to build a sand castle with Rachel, citing that the beach was why he moved to California. He also asked how Rachel had felt about his first comment, and Rachel, seemingly unbothered by it, told him she loved the confidence.

Blake E. brought in a school band and played a drum on his second-first-impression. He did not mention his libido.

DeMario was the one that had tickets for the two of them to elope to Vegas. He was another one Rachel met on After the Final Rose when they surprised her by starting the season with bringing out four men. Whitney said that a friend of a friend that went to college with him said his intentions for being on the show were not pure. Does everyone know everyone around here?

Blast from the Past Frederick Johnson, an Exec Assistant in Dallas, TX was Rachel’s camper when he was in 3rd grade and she was in 8th grade. Apparently, Fred was a very bad camper.

Alex our Information Systems beautiful man brought out a vacuum claiming to be part of the clean-up crew.

Milton brought a Polaroid camera for a selfie.

Adam the real estate agent brought Adam Jr., which was a super creepy, non-useful, not-really-life size, but life-like face doll that he brought.

Bryan and Rachel bantered about how Bryan was trouble, but the good kind of trouble. He spoke to her in Spanish. And they made out. Like a hot make-out.

“She is a triple threat: brains beauty and personality.” – Bryan

Rachel’s Definition of Love: “Love is a sacrifice, a compromise, an unexplained energy.” She definitely found that energy in Bryan.

We had our first and hopefully not our last rose ceremony this season!
Milton expressed every woman who has ever left the mansion on night one’s thoughts, “I bought a bunch of outfits I didn’t get to show off.”

This season the previews show the men traveling to Sweden and the Swiss Alps and Copenhagen. Rachel teases the season with, “I’m putting logic aside and letting my emotions decide. I’m letting love lead the way.”

Let’s get to all the tears, heartache and love!

**Author’s Note: This post written with a case of jet lag. Also reason for it being so late and having watched the episode three times to get their cities.