Shirtless Men. Mud Wrestling. Someone peed in the Bachelor Pool. And someone else is rolling boogers. And they’re single, ladies. Let’s not all jump at them at once.

Wine glasses up, ladies! The Bachelorette is  back this week! Rachel is smart, sassy and confident and amazing to watch.

Who got kicked off: DeMario was sent home one final time. Blake, Lucas and Jamey were sent home at the rose ceremony. Fred was sent home on a group date after a kiss and Rachel realizing she was never going to get over that camper-camp counselor relationship.

“Thank you for the quote about the joy and the pain, but I hope that the pain you got from this experience brings you joy somewhere else.” Oh snap! that’s called using someone else’s words against them.

We need to talk about Tickle Monster, Jonathan. Jonathan brought out giant hands that he let Rachel try on. What is with the hands dude?

Alex solved a Rubik’s cube while they had a full conversation with her.

Blake Aspiring Drummer slash I think he does fitness things. So that’s a weird profession to list. No matter. He is going home!

Weirdest Accusation: Lucas: “Blake has a crush on me. I caught him over my bed peeling and licking a banana.”

Best Response: Blake “I don’t eat carbs.” because of his diet.

I can’t imagine why Rachel sent them packing.

At the rose ceremony, Jamey, Lucas the Whaboom guy, and Blake E. were sent home. Thank the good heavens above we never have to hear that phrase again. You would never know Jamey left too, because Lucas and Blake E. had a whole fight about who got who sent home. It was awkward.

Rachel: “Ellen is my spirit animal.” Isn’t she all of ours, Rachel, isn’t she all.

Ellen like the good confidante and partner in crime that she is, set up security cameras and security for the guys to walk through while she and Rachel watched and evaluated from behind the scenes. As Jonathan strolled through, Rachel explained, “He came out of the limo and tickled me.” Ellen’s immediate response was, “Oh, I don’t like that. Why is he still here?” Yes, Ellen, yes. I stand with Ellen.

She also later aptly pointed out, “Tickle guy does not dance well.”

Ellen also asked Rachel if she had kissed anyone. She admitted she had and when the guys walked out, Bryan was quick to admit it was him. Will chimed in he had too. Peter, the only other one of the bunch who had kissed her kept quiet. Ellen’s response to Bryan was, “Well, we know he kisses and tells. You should not have done that.”

Ellen learned Rachel hadn’t seen the guys take their shirts off yet, so she was quick to remedy that unfortunate situation. Ellen had the guys go topless through the crowd of oggling women with $1 bills waving. Alex soaked it in. Some of the men looked like this was all too familiar territory. Jonathan struggled. It was entertaining to watch though!

Never Have I Ever Peed in the Pool…Alex.

They played one of Rachel’s favorite games: Never Have I Ever. This was a fun game. We found out who of the bunch had kissed Rachel. That Alex peed in the pool and ADMITTED it. (His reasoning was he wanted to show Rachel he was honest. Dude, Rachel is never gonna know if you peed in the pool. Not cool. We don’t swim in your toilet, so don’t pee in our pool.) Also, Peter and Alex said they had never thought about having sex with her, which is either a lie or a lie.

Fred, Jonathan, and Alex were behind on the kissing game. But they were quick to catch up. Fred and Alex locked lips with the Bachelorette at the after party and then Fred was promptly sent home.

Rachel just couldn’t get past the camper-camp counselor relationship and found that even after a shared kiss they weren’t going to get there. She sent Fred home on the group date.

Alex got the rose on the group date. For his honesty. And peeing in the pool.

One-on-One: Anthony got the coolest date ever.

Is this a thing? Can I do this? Rachel took Anthony down Rodeo Drive in Beverly Hills on horseback to go shopping. Rachel looks like she is having zero fun in this picture, but I can assure you, she is having the time of her life. How could you not? You’re walking down the sidewalk of Beverly Hills on a horse and shopping! This is my everything. Rachel said she could take Anthony home to Texas right now. 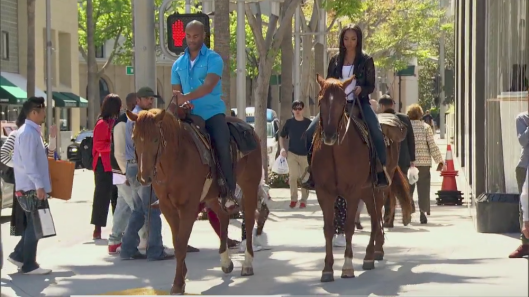 They bought cowboy boots, shirts, a jacket, cowboy hats. And Anthony’s horse pooped in the store. We really need to have a regroup on where it’s appropriate to go to the bathroom.

Date Card: Sometimes in relationships women have to take charge.

Rachel brought back way too many girls to help her plan this date. Raven, Corinne, Jasmine G., Left Shark Alexis, and I think her name was Whitney all came to ride in the limo with all of Rachel’s men she just started dating to go to a surprise date. Raven asked Bryce and someone else who they thought was LEAST suited for Rachel. It was all a little like whisper in your ear, maybe not super appropriate Raven. But both guys said Eric. Drama! As they rolled up to the destination, the guys got out and saw a Saloon. Immediately, they think line dancing. Wrong. The ladies planned a good ol’ fashioned mud wrestling ring with ladies gathered ’round. The guys were matched up and then the winners of each match played each other until there was one final winner. Bryce the fireman beat Pitbull Kenny the profesdional wrestler at the final round. Kenny handled it gracefully.

Eric got the rose on the group date, but not without complication. All of the guys are questioning Eric if he really wants to be there and Eric’s insecurities about Rachel possibly not liking him.

Eric and Lee started to get into a tiff at the cocktail party.

Eric’s favorite saying: “My name was in your mouth.”

Male model Brady’s “professional” go-to is the Booger Roll. So let’s all think about that for a second. My favorite part was when he explained it, “So I look like this, but in my head I’m rolling a booger.” You chase that dream, Brady.

Does anyone know who Adam is? All we’ve heard about is Whaboom and Blake Feud of Season 13. I’m excited to see more of the men Rachel has left. But seriously, Adam, who are you?

Until next time, Bachelor Fans!