Who got kicked off: Dean was sent home. But not for long. He’ll soon be back on Bachelor in Paradise!

Rachel visited her final four mens’ hometowns this week to meet the families. Next week the final three will meet Rachel’s family and we’ll have Fantasy Suite Dates. Then a dose of Men Tell All and the grand finale!

Eric greeted her with some dance moves. Rachel draped her legs over his on a bench as Eric went over where he grew up. They played basketball and Eric’s friend visited. A cool square growing up, was how Eric described himself. His friend said Eric was always able to stay positive and happy and actually inspire others. He got straight A’s. And Rachel admired that he’s had to be a go-getter. Rachel met Eric’s family and was the first girl Eric has brought home to meet the fam. His aunt pulled Rachel aside and asked about Rachel’s journey to find love. Eric’s aunt genuinely asked about how she’s dealing with the pressure of being the first black bachelorette. She cared. I adore her. “We both struggle with being selfish,” Rachel said of her and Eric and her approach to finding love on this journey. She continued, “Love doesn’t have color. I’m gonna make the best decision for me.”

Rachel met Bryan in his element: his hometown of Miami. Rachel gushed about how he talked to her in Spanish. All he said was welcome to Miami. He wore athleisure and white kicks. They played dominoes in the park. Bryan referred to Miami as the city of romance. Are we sure about that? I think that’s lust? Rachel met Bryan’s mom and dad. Bryan is a mama’s boy. Bryan warned Rachel that his mom was the one that didn’t like his previous girlfriend and it’s important that they get along. They made it seem like his mom was super strict on who he dated, when in reality during the blooper reel she seemed super funny and down to earth. Bryan’s mom asked him about his haircut and it seemed super chill. Bienvenidos a Miami.

Peter took her to a bar in his neighborhood where a group of his friends met them for drinks. Peter has a diverse friend group of down to earth peeps. Peter pulled his guy friends aside and asked what they thought of Rachel. Peter seems to get in his head and overthink things. His family was very homey and welcoming. When Rachel asked his mom if she thought Peter was ready for commitment, Peter’s mom said he was ready to commit to one person at the end of this, but maybe not to commit immediately to marriage.

Dean’s dad is a new yogi-type of healer man? I forget what they called it. But after Dean’s mom passed away his father turned toward alternative healing. Dean has been estranged from his dad for two years. They weren’t in Venice, CA. Dean’s dad lives somewhere a little more remote. Dean seemed to handle the day pretty well. With Rachel’s prodding, he tried to express how he felt abandoned by his dad during the most formative years after his mom passed away. Dean’s dad didn’t seem too receptive to going deep into the discussion and got a little on the defensive. Likely because he had like 10 million cameras in his face. Rachel tried to talk to Dean’s dad on camera unsuccessfully. And that was the end of the date.

“I think she’s an incredible woman. I just think tonight she made a mistake.”

Good news! I was traveling and missed this Bachelorette episode, which is why this post is so late, but I have good news. I learned who went home on Germany’s Bachelorette. So you are welcome. Double bonus of hometowns this week. I knew you’d be excited about that. Well worth the wait. 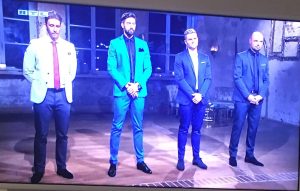 Even better news! We will get to see more of Dean. Dean will be on the upcoming season of Bachelor in Paradise. In an article from ABC 7, Dean says that after the show has wrapped up, he wants to possibly join the peace corps and find ways to give back before going back to his traditional role as a Startup Recruiter. He’s such a good dude.

Also, Bachelor in Paradise will resume in a two-night event Monday, August 14th and Tuesday, August 15th at 8|7c. Warner Bros found no sign of misconduct after they looked into their own show with their own people. And Corinne has dropped her lawyer and investigation. So sure, makes sense.

Two bachelor/ette stars really rooting for it to continue were Carly Waddell and Evan because it was their time to shine. Their wedding was scheduled to be part of the finale of the season, as in previous seasons they’ve included weddings to show true love happens on the show. The wedding took place in Mexico. Carly’s dress was absolutely beautiful! Carly and Evan live in Nashville, TN with his three kids and they are happily in love. 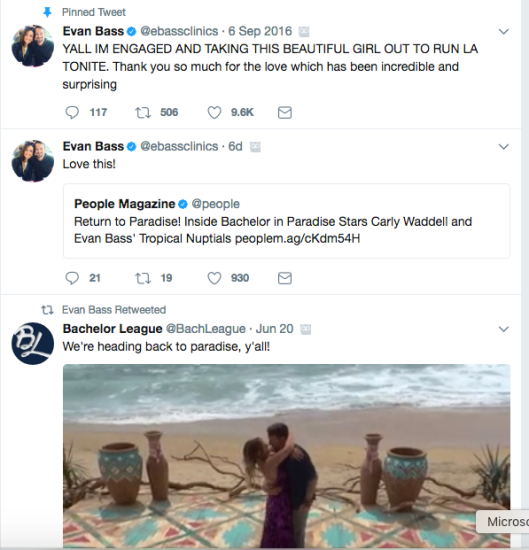 Until next time, Bachelor Fans!

1 thought on “The Bachelorette Rachel: HOMETOWNS”