“Cheers to You Finding Fierce Love.” Chris Harrison with the words. Naild It. And Colton with the other words.

Women Tell All is Chris Harrison’s time to shine. And shine he did. “Cheers to you finding fierce love,” Chris Harrison toasted to Hannah “Beast,” arguably the best part of Women Tell All after everyone got a pint of Halo Top low cal ice cream and of course the bloopers. Colton really likes to use his catch phrase, “Nailed it.” So cute. That’s about it. 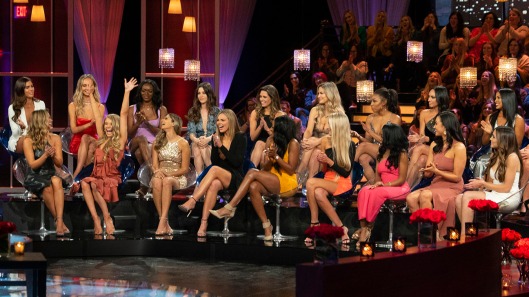 The Bus and Katie’s She Said, She Said Uncovered

We could finally ask Katie about the drama that led to Colton’s confusion with Caelynn and Cassie. Katie revealed that on the bus in Singapore to the hotel, Katie overheard Cassie and Caelynn talking about winning The Bachelor, sliding into other cast members’ DM’s, (oh, the kids these days), and the possibility of becoming the next Bachelorette. Katie said, “It was the word ‘winning.’ He wasn’t something to be won, it was a relationship to work towards.” Katie also revealed she never said they weren’t ready for marriage; Katie said Caelynn and Cassie weren’t valuing what Colton was valuing at this moment – i.e. clubbing, etc.

Elyse was at a wedding out of the country, which was why she couldn’t be there.

Onyeka took a little bit of heat with everyone and especially Nicole. A lot of ladies were talking over each other so it was difficult to hear all of their arguments.

They did a replay of many of the girls’ journey from coming on to the show to how it ended with Colton. Nicole’s was a lot of tears.

Sydney (who we are still unsure if she has her NBA dancer job or not) sided with Nicole. Someone sided with Onyeka. Nicole stood up and defended herself. Hannah B. sided with Katie. Caelynn apparently made phone calls to multiple ladies on the show and possibly through talks confirmed Katie’s version of what happened on the bus. Caelynn denies it. No one cares. We just wanted to know what happens on the other side of that epic fence jump! Fun Fact: We learned that the fence is 8 feet high.

The Most Inappropriate Moment: Courtney put a pacifier in Demi’s mouth. Weird. They have a feud and Demi has been labeled as immature. Demi counters with she’s just owning her personality. But that was alarming for Courtney to physically put a pacifier in Demi’s mouth. She had been sitting on it (literally) for awhile in her chair. Demi didn’t really respond, except by throwing it back at her and then calmly taking her position in the hotseat with Chris Harrison to “talk about Demi.”

Demi called herself promiscuous and said she owns who she is and that being vulnerable is hard for her. Chris Harrison hinted that we would see Demi on Bachelor in Paradise.

Nicole got a year’s supply of ice cream from Halo Top. Nicole cried a lot this season – when she was happy and when she was sad. She also gave her whole resume and profile. “My mom is a psychiatrist. I’m Cuban American. I have an autistic brother. I like to dance.” She can add recipient of one year supply of Halo Top lo cal ice cream to her list.

Hannah B. aka Hannah “Beast” as she is fondly known in the house took the hotseat. The best moment of the night was when Chris Harrison brought out champagne flutes and made Hannah B. redo her toast from her first date with Colton.

Quotes by Hannah B.: Hannah B. had a life-changing experience from her time on The Bachelor and seems to have grown from it because she has all the words. Word around the rumor mill is she is going to be our next Bachelorette.

Hannah B. to Chris Harrison: “I want someone to love me fiercely.”

Hannah B. to Chris Harrison: “I will not allow myself to not feel chosen every day.”

Hannah B. to Colton: “I hope you get to chose that person every day and that they choose you back.”

Sydney point blank asked Colton, “Are you still a virgin?” After their banter about sexual innuendos, Colton responded with something about it being snowy in Denver, which is his home town currently.

Demi: “You missed out on a good fantasy suite with me.”

Chris Harrison: “We may not be smart but we’re also not good at what we do,” he said in reference to filming an episode next to a train track.

Previews of This Week:

The finale will be two nights this week, starting tonight Monday and Tuesday 8|7c.