Toast #1 Accomplished. Scott Sucks. Roll Tide Count is 5. You have Jed to thank for that.

Hannah Beast is kicking booty and taking names. She is ready to find fierce love and no one is going to stand in the way of that. With a sparkly, sky-high slit gown and some Hannah B. fierceness, she is ready to find the man of her Alabama dreams.

Who Got Kicked Off: A lot of men. Scott had a girl back home, and Hannah B. sent him packing. 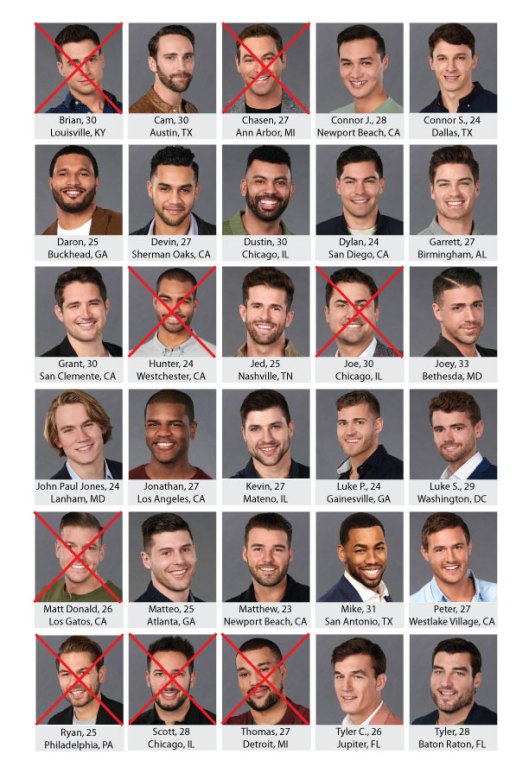 All of the Introductions: You can scroll down if you don’t care about the intros. They were average.

Connor S. also known as Tall Conner jumped a fence for Hannah B. How much you want to bet there was a stool behind that fence. I want a real fence jump, Connor! A real one! Although, he did look out of breath when he reached Hannah B., so maybe I’ll believe.

Golf Pro Garrett said, “There are a lot of bogies here, but I hope to be your hole-in-one.” Well, aren’t you sweet.

Joey brought a baby carrier with champagne in it.

Connor J. spoke French and threw a bachelorette party with Hannah’s name in gold balloons and a crown. 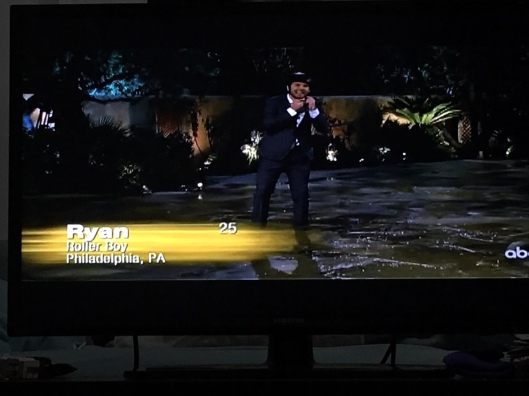 Cam NO, CAM, NO. You have already rapped. And a microphone this time. No. I did like that he referred to his rose as an opportunity to spend more time with Hannah, not just to make it through to the next round. No more microphones, Cam.

Tractor Man Matt Donald went home. But he came in on a Tractor with an Old MacDonald remix. Eek. He went home. Love you, MD!

Joe the Package Man came in in a giant package.

Devin made a virgin joke that fell flat. He stays.

Jed is a singer/songwriter. There is always one. Don’t let me down, Jed. He sang a song later with his guitar.

Two Pilots. Only One Came Out On Top. Chasen gave her a paper airplane and told her a little insight into what he does is that his favorite part is take off and he related it to their love taking off. Smooth. Smooth landing, Sir. He was immediately followed by Pilot Number 2 Peter.  Peter came in his uniform and gave her wings. Peter stayed. Chasen went home. Good! More for me!

Sausage Guy Grant made a few carnival fare puns, saying it was a “sausage” fest in there and he brought the mustard so they could “relish” this moment, and he would “ketchup” with her inside.

Pizza my Heart Dude Jonathan brought a full pizza to which Hannah B. dug into. It had pineapple. Bonus points for the pineapple. You an express your strong feelings in the poll. 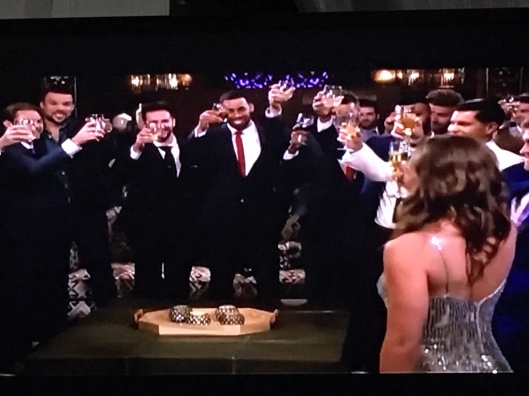 Hannah B. did a Hail-Mary-Lord-Jesus-Help-Me prayer before she went in to give her first toast to the men. She gave a lovely speech and ended with Colton’s famous words, “Nailed it!” It was only appropriate. 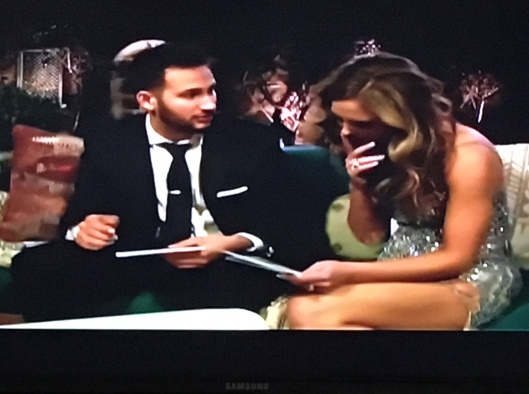 That sky-high slit though. Killing it, Beast.

Scott Sucks. Scott (above) had a GF back home and said bye to that gf on the Monday (3 days before that night). Katie and Demi came in a white van in the back to spot Scott, the guy that Demi said she was tipped off about in her Instagram DM’s. All hail, social media. Demi was sent texts between Scott and the girl he was seeing three days before he went on The Bachelorette. Demi and Katie told Hannah in the back and Hannah confronted Scott. He said, “Do you want me to go?” And Hannah said, “I want answers.” He admitted to talking to a girl on Monday, three days before this day. And THEN he threw it back at Hannah B. saying she was literally just in love with Colton. What the what. Wrong move, dude. Not the same. And Hannah B. was like Sayonara, Scott. Then she got a little tripped up because that was her fear that the guys wouldn’t be real with her, and just prior Scott had her picking out paint samples for their fake interior-designed home. Hannah B. went back to the group of men and invited any more men to leave that were not here for her. Luke P. went to find her and comfort her.

The guys were so cute. They shushed each other as Hannah B. came back through the room as she led Scott out. 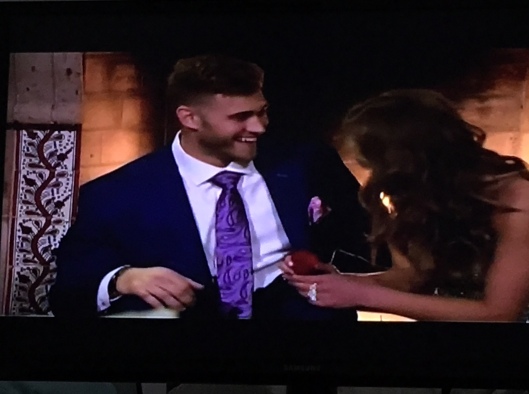 Everyone left in the daylight, meaning that was a loooong night of filming.

Hannah B. and Chris Harrison Talks

The interactions between Hannah B. and Chris Harrison are among my favorite moments. Chris Harrison asked Hannah what her type was, and she responded that she didn’t have a type that she was like confetti cake. Try them all!

Chris Harrison cleaned up the peanuts from the driveway from Joe the Box Guy’s box.

The Roster and Stats

Funniest Moment of the Night or Just Kudos to Hannah B.

“That’s a big package…heeeeey,” Hannah B. proud of her own funny. Go, girl!

ABC Introductions (aka Boys to Watch Out For)

Tyler who shall be deemed Magic Mike. He is a contractor AND a dancer AND ripped.

Mike the portfolio manager with the perfect brows. We shall call him Flawless Eyebrows.

Joe the box guy was sent home. He had too many puns. Package puns. Checking the boxes puns. It was endless. Thank you for ending it, Hannah.

Matt from Los Gatos, CA has a deaf family. His parents and his brother are deaf so he speaks sign language and is super attractive and loves Crimson Tide. He went home.

Luke found Jesus in the shower.

Obviously, I’m rooting for Dylan because he hails from my hometown of Sun Diago, but who are your picks? I miss Chasen.

Hannah B. is doing great, going strong. She made it past the first toast and is headed down the road to love. The previews show a lot of highs and a lot of lows.

Bonus, bonus. The wine I uncorked in honor of Hannah “Beast”‘s journey. Folly of the Beast from Winc.com. Not an Ad. Just a happy coincidence and a Guilt Coupon. 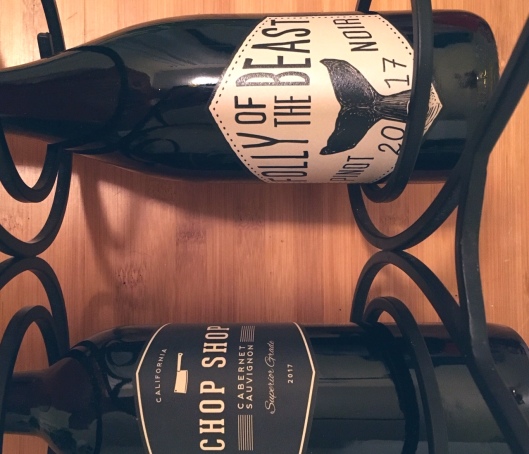 * I effed up. I X’d out Devin when clearly he is sticking around. Devin, Kevin, Kevin, Devin. Updated the Bachelor Board. Hopefully, it didn’t mess with your Bachelor Brackets.