Tyler C. Wants To Pick Hannah Up in the Good and the Bad Times. Peter the Pilot Asks Hannah B. to Go Steady. Celtics Players Give Great Relationship Advice.

The crew traveled to Boston! And to the adorable little city of Newport, Rhode Island.

Who got kicked off: No rose ceremony this week. All of the red X’s are those who left last week. 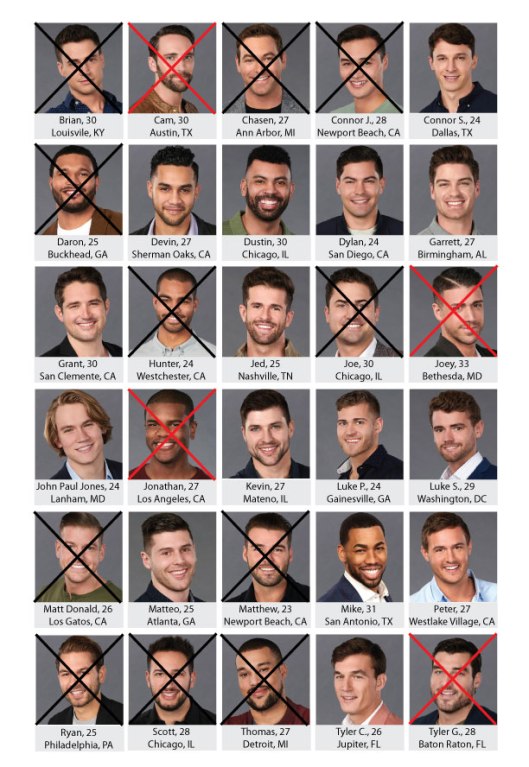 One-on-One: Jed got the first one-on-one date in Boston. They went to the Cheers set bar, and strolled through the Boston Common. Halo Top Ice Cream made an appearance in the Commons. I can assure you the ice cream man was a plant. There is never a Halo Top Ice Cream man in the Commons, only a regular, old, run-down, delicious old school ice cream truck with worn images of the ice cream bars available. The pair went to the Celtics practice arena for some two-on-two basketball. Celtics Players Terry Rozier and Jaylen Brown were the partners for Hannah B. and Jed. They also gave Hannah B. great advice on relationships. Swoon. At dinner, Singer/Songwriter Jed let her know he was originally not here for the right reasons (all about that guitar), but now is in it for Hannah. Hannah appreciated the honesty and let him off the hook. She gave him a rose on the date.

Back in Newport, Rhode Island…

Group Date: The group date was rugby. The men were introduced to the game of rugby and were given drills and some practice time. Then they were split up into two teams. It was brutal. Kevin injured his shoulder and went to the hospital. Garrett scored a few points. JPJ scored at the rugby match and brought back the phrase “Shaka Brah!” with hand gestures. So he’s still going strong. Luke P. went crazy and knocked the wind out of Luke S. apparently for no good reason. And thus began the Luke drama.

Garrett kept it real and got the rose on the group date. He told Hannah he is crushing hard.

One-on-One Date: Tyler C. and Hannah B. went lobster fishing, but not before Hannah B. had a meltdown of tears over Luke P. Dear, Lord. Hannah B. looked like she was going to cancel the one-on-one date with Tyler C. because she was so confused about what happened with Luke P. at the rugby match and questioning her ability to judge people’s character (because everyone dislikes Luke P.) and she didn’t want to see anyone. Before she could fully get the words out, she told Tyler C. she wasn’t much fun today. Tyler C. comforted her. He told her he wanted her in her good times and in her bad times, and that he wanted whatever he could get of her. He had her regardless. How sweet! Tyler C. turned it around and assured her they would have fun and this whole journey for Hannah would all be worth it. Tyler C. made cute jokes and playful comments and dissuaded her assertion he was a player (Fun Fact: he was once drafted to play for the NFL Baltimore Ravens, but didn’t play due to an injury.) At dinner, he revealed that two months prior to the show he almost lost his dad. As his dad was recovering they watched Hannah B. on Colton’s season and they bonded over her and his dad told him to go get his girl. Hannah B. and Tyler C. bonded that date after Hannah confessed she thought he was just a player, but that she was wrong. After dinner, they had a concert by Jake Owen. Country singer, Jake Owen made funny, amazing faces at Hannah B. and Tyler C.’s make-out session while he serenaded them with Made for You.

Cutest Banter: As they were reeling in the lobster traps, Tyler C. told Hannah, “Stop getting lost in my eyes.”

At the Cocktail Party

Cutest Moment: Peter the Pilot asked Hannah to be his girlfriend and prefaced it with he’s okay with her dating 14 other guys. Cute.

Mike wants to make Hannah his fourth “Queen”, beside his sister, mama, and grandmother.

Mike and Garrett called Luke P. out on his crazy, and his unsportsmanlike body slam of Luke S. on the rugby field. Mike mentioned there was a reason Luke P. was targeting Luke S., because Luke S. is an easy target. Luke P. told Hannah Luke S. was only here to promote his non-existent tequila business. Garrett spoke up to Luke P. about his behavior in front of the group. And everyone walked out as Luke P. started to make up lies and change his story to fit the situation.

No Rose Ceremony. Instead Hannah B. called in both Luke’s to have a sit-down and get to the bottom of this feud. Luke P. lied to Hannah about a lot of stuff, mainly of which Luke S. was here to promote his non-existent Tequila business. Luke P. also lied to Hannah about Luke S. asking him to put in a good word with Hannah after the fact that Luke P. sullied his name.

If you haven’t or don’t know about it, you should watch the Ellen Staff’s Bachelorette Recap with Hannah Beast of this recent episode as they try to guess Hannah’s feelings towards the guys thus far. It takes place in the cubicles behind The Ellen Show and it is fabulous. They also are spot on with my favorite bachelors thus far this season.

Correction: The next episode is Tuesday 8|7c on ABC. Tonight are the NBA finals.