Roll Tide Count This Episode is 0 For Those Still Playing Along At Home. Hannah Beast is MOOD. The Sky High Splits Are Back. And the Sisterhood of the Traveling Blazer is a Thing. All the Men Sought to be Hannah Beast’s Braveheart.

The crew flew to Inverness, Scotland and many kilts were worn and many Luke-ness Monster jokes were formed. Mike got his first one-on-one date and he was adorable.

Who got kicked off:  Luke S. sent himself home. JPJ and Matteo went home at the rose ceremony.

One-on-One: Mike got the first one-on-one date. They went to a place I like to call heaven on earth. Whiskey Tasting! Just kidding, it was a grand, old bookstore. Sigh, so beautiful. But they also did a whiskey tasting and went to a candy store and tried the Black Death. Best facial expressions.

At the whiskey tasting, Hannah B. likened something, I think it was ladies, to whiskey: strong on the inside and ornate on the outside. Hannah said in her interview that she had had a lot of whiskey. At a local pub, they tried Haggis, at the recommendation of an Englishman. Come to find out Haggis is sheep intestines cooked in the belly of the sheepskin. Yum. Different, different.

At dinner, Mike got all flustered and giddy and told her he never did this. He’s falling for her.

Achnagairn Estate was where they all stayed. Fun Fact: It also appears to be an ideal wedding venue. Fate? I think so.

Best Quote of the Night: Goes to my Sherman Oaks man, Devin:

“I want to give Luke P. the benefit of the doubt, but honestly I just feel like he’s a big ass douche canoe.”

Group Date: A good ol’ Scottish, Braveheart Battle for Hannah’s heart, complete with games! First, there was the ax throwing. All the men appeared to struggle, while Hannah, one hand in her pocket, nailed it. She got excited, hopped around and shouted, “Bow to your queen! Bow!” Adorable.

Quotes by Garrett: I don’t know why this makes me giggle, maybe because I’m 12-years-old, but it does. Garrett said, “Hannah’s the only one who stuck her ax in the wood.”

The two other games were milk racing and Scottish-type wrestling, which means no undies under your kilt wrestling. During the games Jed had a great time. He was laughing and said, he was ready to be pinned by the Queen. At the milk race, he poured the milk on himself.

The Scottish wrestling required the men to be commando, so flashes of what’s under their kilts was bound to happen.

Equally Best Quote of the Night: Hannah Beast said, “I saw all the bagpipes. But at the same time it’s not the size of your bagpipes, it’s how you play it.”

Jed won the competition, along with a square foot of land and became Lord Jed. And I guess by proxy, Hannah B. became Lady Hannah. He also won the rose on the group date.

Funniest Moment of The Night: Kevin walked in on Hannah B. and Jed’s make-out session and described it as Hannah “having him pinned down.” Kevin also poked playful fun at Jed when Jed came back. It was cute. Bro friendships.

Hannah read in Gaelic with Devin, and the passage read, “It takes time to make a castle.” Yes, yes it does, Hannah Beast.

Tyler wore his kilt again just in case she “wanted to take another peek.” Oh, Tyler C. Swoon. Hannah made a comment to Tyler C. that most definitely sounded like “wax that ass,” but it was something like work that ax. Unclear. Anyway, Hannah B. told Tyler C. she had a surprise for him and led him to the bed for a steamy make-out session. Tyler joked he would wear his kilt more often. 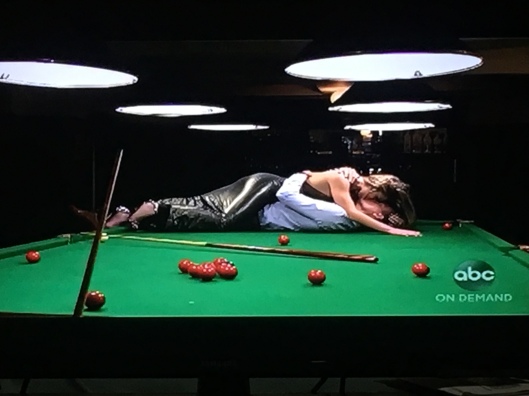 All in all, Hannah had a fabulous time, probably one of the best dates. This is important to remember Hannah Beast. Fun Times WITHOUT Luke-ness Monster exist.

Speaking of the Luke-ness Monster…Just end the episode after the group date because that was fabulous.

Basically, Luke P. blows, but read on if you would like clarity…something Hannah knows not of due to Luke P. Ohhhh, burn.

One-on-One Date: Luke P. got the one-on-one date. He played the victim, passed the blame–onto Hannah no less! He played his cards strategically, saying whatever she wanted him to, but no more. He name dropped. These are examples of RED FLAGS people. Crimson Tide Red Flags.

Hannah B. tried desperately to get some emotion and more of what she needed from Luke P. But it was not happening. Not only that, Hannah B. said, “I want a man who people are drawn to. What’s inside is what’s appealing.”

Luke P. “Anywhere I’ve ever been in my life people love me.”

Hannah B. “Do you understand how that sounds?”

Hannah is digging for emotions that aren’t there.

He name dropped Kevin and another guy, saying they attacked whatever he says making him afraid to speak in the house. He also had the audacity to say he’s feeling like he’s not getting the Hannah that he first met and fell in love with. Like what the heck? Own your stuff, Luke! Don’t blame Hannah. I’ll come find you.

Luke P. “I want to give you clarity. That’s all I want for you.” Lies!

Hannah B. rightfully asks him, “Do you want to know how it makes me feel?” Argh! Frustrated sigh. “Can you not express your emotions? Because I need more.”

Hannah B. is focused on his lack of emotions when she should just be sending his troublesome tushy home.

When Hannah returned from her breather talking to producers that told her it just takes time (Yeah, they want to keep this drama rolling. Of course they’re not going to tell her to send him on his way), she was met with sh*tty words by Luke P., “It hurts me. This is not easy for me in any way.” For you, Luke P., For YOU?! Awww hellz to the no. You do need more, Hannah B. And it is not in the form of a Luke-ness monster.

Hannah B.: “He’s not really saying anything.” Yas Queen.

“I didn’t get met where I needed to be,” says Hannah who keeps him anyway.

Cutest Quote of the Night: Even in the midst of her battle with Luke P. and trying to get him to express emotions, Hannah B. said, “Like I wanna know, do you like macaroni and cheese or spaghetti more?” Adorable.

Hannah B. arguing with Luke P.: “No! I want to stop for a sec and just be mad. I just need the real.”

Hannah B.: “What if I let go Luke and he’s who I’m supposed to be with?” No, home girl. No. No love is that hard. Peace. Send him on the next bus home.

THEN Luke P. Has the audacity to blame Hannah for nothing again, saying, “It has been hard for me. Because I haven’t had the same Hannah.” Double WTF.

Then he turned the tables to play with her emotions and relate to her saying, “What held you back from holding back and being the real you.” In their words, how do I get out of this situation or avoid this question. He is a manipulator.

Luke P.: “We’ll get out of this and it will help us grow. I love every single thing about you.” Triple WTF.

“I am the same way. If there’s a trait or a flaw then I want you to tell me,” Luke P. says. Except if we journey back, that’s what Luke claims is holding you back from opening up and that’s Hannah’s fault? That makes no sense.

Luke P. tried to further confuse and buy more time by asking if she had enough time with him to know. Hannah responded, “I’ve had as much time as any other date I’ve had. I don’t feel good. And I don’t know how I feel about you.”

Also, Luke told Hannah in .5 seconds he was falling in love with her and then before his one-on-one date said it would determine whether they have a future together and if he sticks around. He denied saying that when Kevin ad Mike confronted him. You make no sense Luke P.!

Hannah B. “I don’t like people that make me feel crazy.” No swizzle sticks, Hannah B. No one does. Boy needs to go. Hannah B. is expressing herself in a very coherent way in every way possible.

Hannah B. said she could not give Luke P. the rose. The cameras cut though, so we didn’t see her walk him out. So maybe she couldn’t give him a rose now but wanted him to stick around for the rose ceremony so she could think it out. Unclear, but that’s my theory.

Sisterhood of the Traveling Salmon Blazer

Tyler C. posted a cute Instagram Story photo documenting all the men that have worn the salmon blazer that is ever so popular this season. 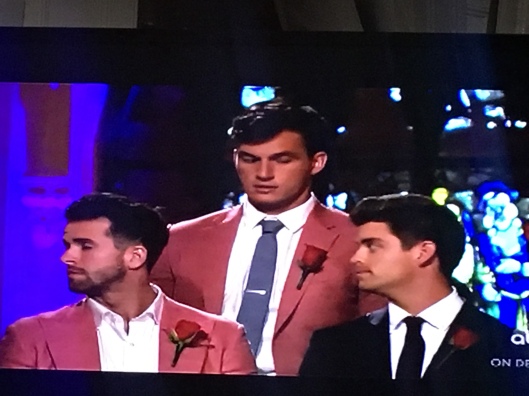 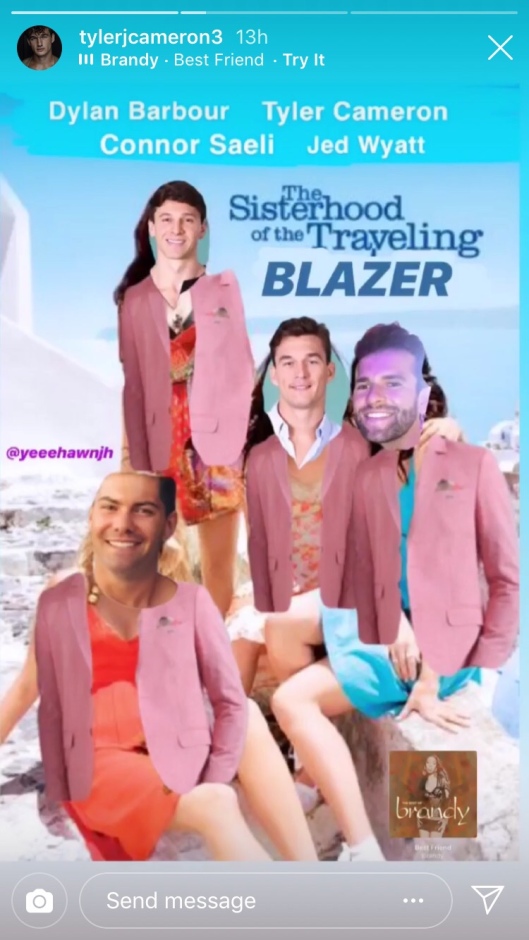 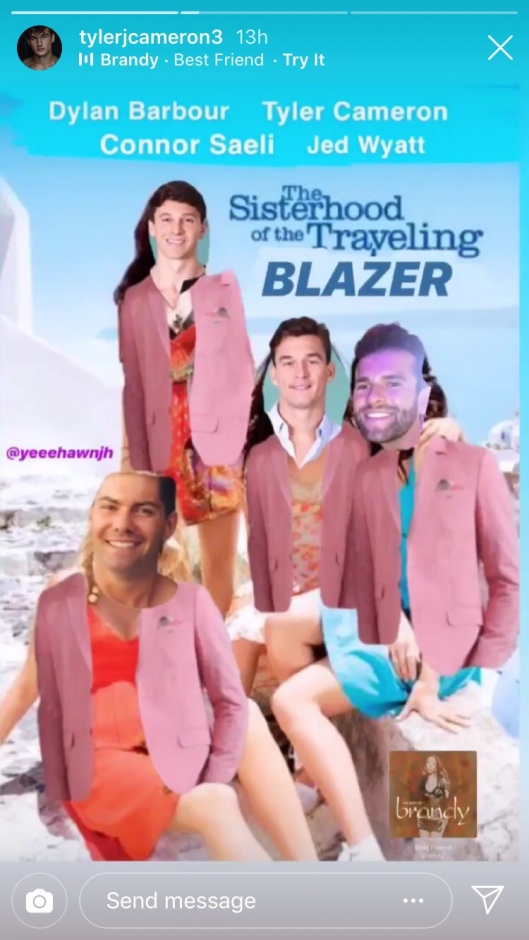 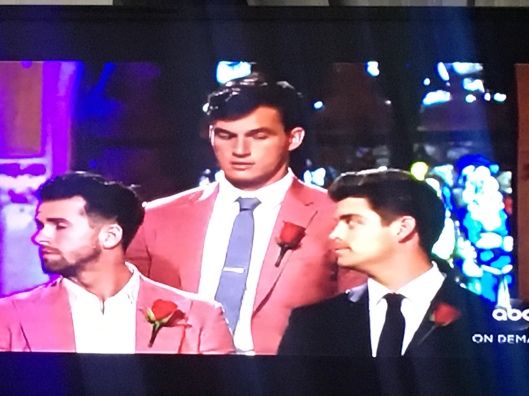 Next week, we find out if Luke P. is still around. Hannah says she’s out. Garrett says it’s his fault and Luke P. is in the church praying. Lord on High.