Another cocktail party Thwarted by Luke P. When in Latvia do as the Latvians do. Hannah B. went naked couples bungee jumping. Also, Latvia has moonshine. Fun Facts.

Riga, Latvia is the scene of Hannah B. opening up to the men for love. Latvia has a lot of half-naked activities for Hannah and her men is what we learned tonight. A sauna, a hot tub and naked bungee jumping. 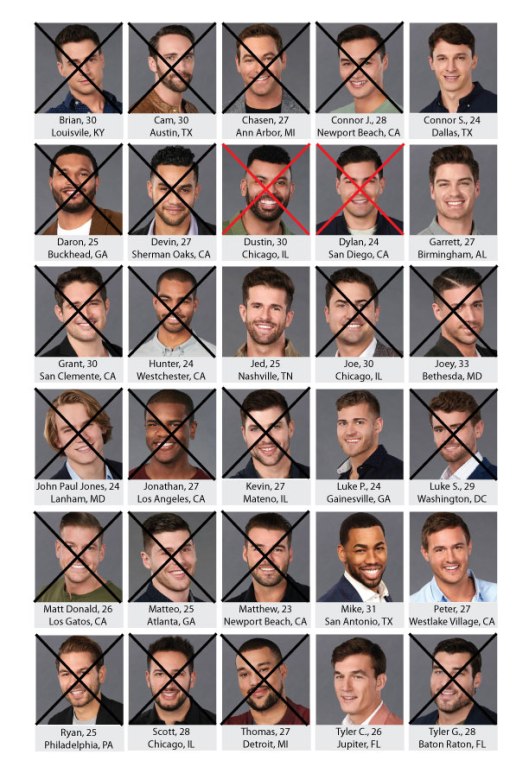 Hannah Beast Getting Her Real On

Hannah Beast has lived to make others happy and now she’s “Not letting others control everything that I do. Rejection is all fear, and I’ve allowed that fear to control me and it’s a battle every day. It gets easier, and I have the tools to fight it.” Go, girl.

One-on-One Date: Garrett got the first one-on-one date. Garrett and Hannah were met by a naked Latvian couple jumping out of a skycar. When in Latvia, do as the Latvians do. Hannah and Garrett followed (birthday) suit and bungee jumped naked out of a cable skycar. At dinner, they talked about overcoming fear, feeling free and taking a leap of faith. Golf Pro Garrett is moving on up in the love department. Garrett got a rose. 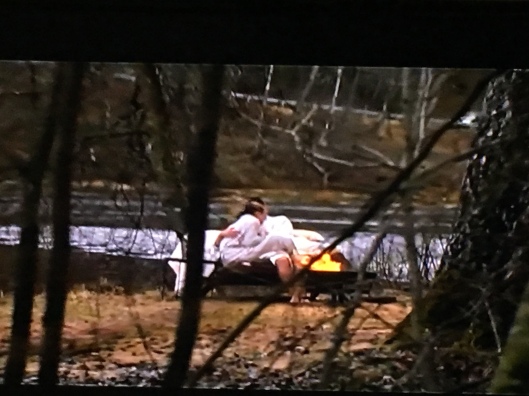 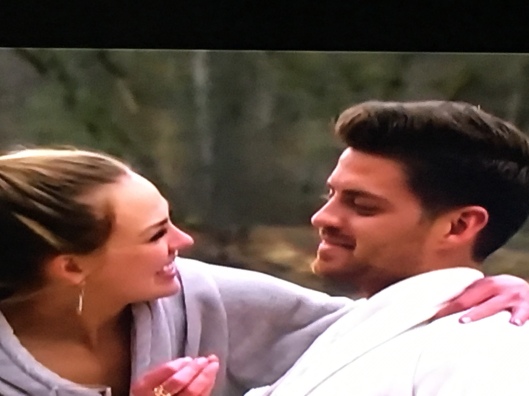 “You allowed me to feel so free in a moment I thought I would never do,” Hannah B. told Garrett.

Garrett told her he was laying all his cards on the table and that he was falling in love with her. Also, he’s afraid of heights. 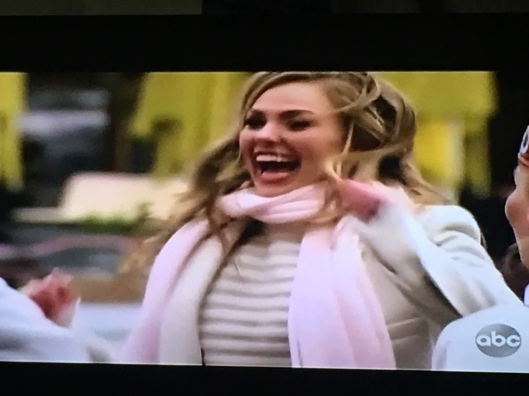 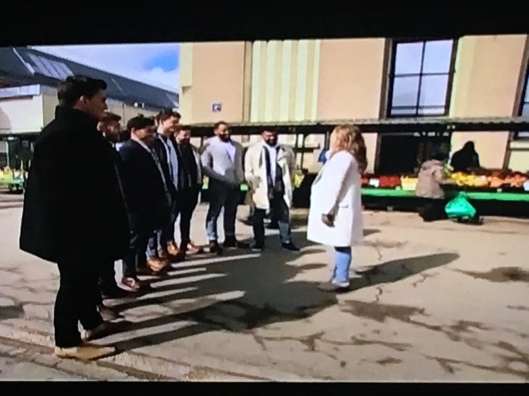 One-on-One Date: Peter the Pilot got the one-on-one date and spent time with Hannah in a Latvian sauna for a steamy make-out session. Peter the Pilot is dad-material with the steamiest make-outs. Exhibit A: Backyard pressed up against the wall. Exhibit B: Pool table Exhibit C: Sauna in white bathing suits. Hannah and Peter the Pilot enjoyed a hot tub after their time in the sauna. The hot tub finally made an appearance. Peter the Pilot also spoke to Hannah B.’s heart when he shared a phrase (pretty sure that was Spanish) that his mom or grandma used to tell him that was basically “Let the waters run because what is meant for you will not tarnish and will always come your way.” And Hannah swooned. Peter the Pilot got the rose.

Peter the Pilot told her that he was hurt when Hannah B. grouped him in with everyone else that she was frustrated with because he genuinely likes her. Sweet.

Jed stole some one-on-one time by playing his guitar to Hannah’s open balcony window. He scored a make-out and told her he’s falling in love with her.

Luke P. said some shady sh*t this episode. He told Hannah B. he was not about her bungee jumping naked with Garrett because her body is her temple and it was a “slap in the face”. And then he told her he would be there for her no matter what “bone-headed mistakes she made.” Oh hell to the no. Also, note: that SHE made. Not Luke. That missile was firmly and directly placed at HER. And then he had the audacity to deny it later when she confronted him that it bothered her. Oh HELL to the NO. Get to stepping.

Tyler C. was like dude she’s embracing another country. Let her do her. Thank you, Tyler C. Luke P.’s pattern is to blame Hannah for all of the things, then take it back or talk in circles or repeat what she says until she’s thoroughly confused, and then he apologizes and that’s why he’s still around and that’s why Hannah is all kinds of hurt.

Luke P. doesn’t give a bag-o-crapola how Hannah feels. He just cares about keeping her all wound up. Luke P. is the reason, not the group of guys, that Hannah feels off. Hannah B. actually has a pretty cool group. If she would just open up and remember Scotland and how fun that was without Luke P. That numbnut.

What I REALLY don’t like is when Luke P. throws his stanky poo back on Hannah and asks her if she’s had enough time with him and “I don’t know if you remember everything I said.” THAT grinds my gears. He tries to make her question herself when he runs out of things to say. Hannah B. has held her ground on those, saying she’s had the same amount of time as the other guys and that she DID remember everything and that they are NOT on the same track. And yet, he stays and takes away the cocktail parties because he emotionally exhausts her. And I very much like the cocktail parties, so poo poo on you, Luke P. POO POO.

Also, Garrett and Peter the Pilot both said on their one-on-one date that they were sad to see Hannah so upset because they CARE about her. Luke P. just spent his time blaming Hannah for all the things and then throwing her words back and apologizing. That kid talks in so many circles and denies everything he says that it makes my head spin. Oh, how he boils my blood. You should not be confused in the relationship. Period. Dump his booty. And now Luke P. has taken up all of this post like he takes up all of the time and we have none of the cocktail parties. Shame on you, Luke P. Shame bell.

Busted and Also Equally Deserving of the Shame Bell

Jed had a girlfriend back home in Nashville named Haley Stevens. He wrote her a love note before coming on the show. She told PEOPLE Magazine all about their dating and that Jed didn’t talk to her when he got back to Nashville. He ran into her at a country music event and told her, “He didn’t know what to say.” Ummm, how ’bout I up and found a new girlfriend while not breaking up with you and avoiding contact. That’ll do, Jed. That’ll do. Kelly Keegs told us Week 2 in her Instagram Live story (which you should totes watch after the episodes) that Jed had a girlfriend back home. Surprise, surprise the singer/songwriter isn’t here for the right reasons. Pro Tip: Do not leave a paper trail. Because they will publish the ish out of that evidence.

Kelly Keegs also called on her High Point friends to tell her stories about Luke P. and she found out some dirt mostly about how he has treated women that I won’t talk about here, because it sucks, and I’m still waiting on my shame bell to arrive in the mail. Luke P. sucks.

If you only watch one thing this episode, watch the ending bloopers where they sing a church song with Jed on piano and the rest on vocals. Actually, I’ll just plop it here. It’s fabulous like Tyler C. who also does runs in NYC Central Park at 6:30pm’s on Thursdays and supports a food/mentorship/education foundation for low-income kids called ABCFoodTours. So swoon.

To be fair, Tyler did say that he loved to dance… #TheBachelorette

They say if you want to go somewhere fast, go alone. If you want to go somewhere far, go with someone… Just got done running a 5k this morning with Matt. Ran my best times due to being pushed by a partner. I encourage you guys to move today and move with someone! Make each other better! Going to be dropping the date, time, and location for our next group date run tonight! Looking forward to running with you all again! Have a blessed Sunday #Myler