The Crew is in Costa Rica! Peter Has 22 Stitches From Losing a Fight With a Golf Cart. And He is Handing Out Roses All Willy Nilly. Kelley is Not All In On Love Yet. Alayah is Gone Again. Two Rose Ceremonies.

The crew headed to Costa Rica! Peter hit his head on a golf cart with drink in hand and the glass cut his head. He got 22 stitches in Costa Rica. He tried to tell the ladies he got attacked by a puma on a walk up a mountain, but that’s just not true. It may be impairing his judgement because he’s handing out roses outside of the rose ceremony.

Another episode is airing this Wednesday night at 8|7c for 2 hours!

Who got kicked off: Alayah was sent home before the rose ceremony. At the first rose ceremony Deandra, Kiarra and Savannah were sent home. At the second rose ceremony Lexi and Shiann were sent home. So long to our fellow redhead. Shiann left an ominous message for Peter that things were not as they seemed with all of the ladies. His biggest fear basically. Sooo thanks for that, Shiann. 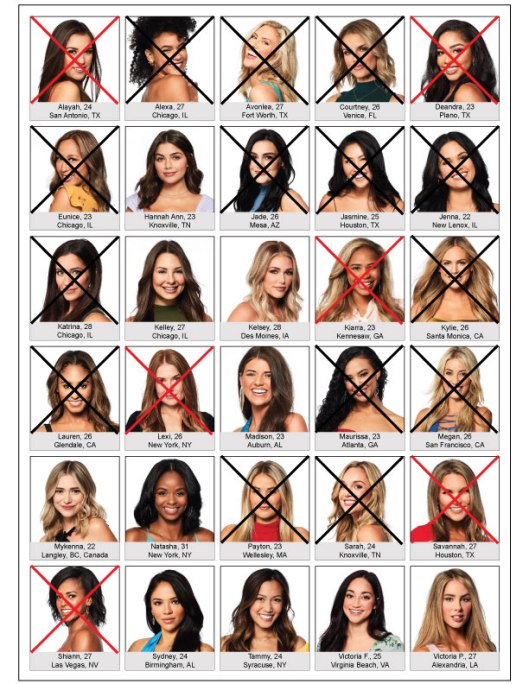 Kelsey got a rose after she snuck away to talk to Peter. She told him she wanted to clear things up, and she got emotional. And Peter was like here is a rose. Just handing them out all willy nilly up in here.

Hannah Anne got the rose on the group date. The group date was another modeling competition. The ladies posed in swimsuits in front of a waterfall with Peter. Victoria F. won the competition and a cover photo of her and Peter on Cosmpolitan.

Cosmopolitan decided not to digitally air the photograph of Peter and Victoria F. because Victoria F. had modeled for a brand previously that used racially inappropriate slogans. And Cosmo was like we’re not touching that. Eek.

Kelley got a one-on-one date and a rose on the date. She called Peter out for rewarding the youngins and drama-starters  who are not ready for marriage. She doesn’t know if she’s on the same plane (pun intended) as the ones Peter is drawn to. She’s not wrong. Peter wants her to be fully committed to the process and basically gave her a lecture when he gave her the rose.

Sydney got the first one-on-one date and a great time and a rose. They went flying in a helicopter, had a little picnic and made out in a steamy hot tub. She also was throwing out mean girl vibes to Tammy because Tammy let it rip.

Tammy and Kelsey had a feud this episode. Tammy called Kelsey emotionally unstable and let Peter know that Kelsey cried for four hours in the house and was tipsy. Not a great look for Tammy and not a great look for Kelsey. That was when Kelsey decided to slip away from the girls in the hotel and talk to Peter. Against the rules! She walked back into the group of ladies with a rose and tensions were high. Kelsey did not handle that well explaining how she now has a rose prior to the rose ceremony.

Tammy interrupted Peter before the rose ceremony because he had canceled the cocktail party. Then Mykenna interrupted Tammy. It was so strange. Mykenna is make-shifting her own cocktail party. And Madison was having none of it. She just sat down and waited for the storm to pass. Peter sent the red-headed Lexi home (the one he gave a red car too and couldn’t remember) and Shiann who was like these girls are not what they seem. They crazy!

Peter’s just happy to be here. But man, is he having a rough go of it, falling for what appears to be the non-wifey material. We shall see. Tune in Wednesday night from 8pm-10pm for an extra night of The Bachelor. Stock the wine fridge!

Tweets of the Night: Fun tweets from the first night.

Alayah got herself a one way ticket to paradise #TheBachlor pic.twitter.com/TNzTcEY3wl

When Victoria said “Kobe” while shooting hoops with Peter… lost it #thebachlor pic.twitter.com/xzbLmKzZeB

Ok but how did Tammy not win the photoshoot contest where is the JUSTICE #TheBachelor pic.twitter.com/hFDrMRPdly

Hannah Ann has been preparing for this date for years #TheBachelorABC pic.twitter.com/OYkuEyzQSB

Shout-out to Madison for deciding to just sit down until this ends #TheBachelor pic.twitter.com/Tp8kmFJSrP

This video perfectly captures the essence of a rose ceremony #TheBachelor pic.twitter.com/WDwiXw5Dnv

Kelley is annoyed this date with Peter is getting in the way of her trip to Costa Rica #TheBachelor #BachelorNation pic.twitter.com/KNuOWdcR5i

Kelly: You reward drama.
Peter: What?!

Also Peter: Kelsey, thank you for sneaking down here. Here is a rose. Sport is proudly back with those other girls, okay champ?#thebachelor pic.twitter.com/g2i64y9HK6

How can you send Lexi home after she delivered looks like THIS. 🔥#TheBachelor pic.twitter.com/HaZ0LNApqR

Kelley realizing the type of “girls” Peter is into #TheBachelor pic.twitter.com/Y4wi7vbwtw

me watching kelsey walk back into the mansion rn with a rose: #TheBachelor pic.twitter.com/HSugBdGyNY

Sydney pretending that she didn’t also bring up another girl to Peter. #TheBachelor pic.twitter.com/703qQuWnq2

"You also have to be realistic in this situation and think, ‘OK, I know he checks off a lot of boxes, but am I into it?” — Kelley Flanagan, icon of normalcy #TheBachelor pic.twitter.com/e1WSZcYpOP