Peter is annoying me with the strength of a thousand Chilean suns. Kelley is GOne and This Post is Basically About Her Because SHe is A Queen.

The crew is in Lima, Peru. Kelley was just stoked to see some alpacas. Peter was looking at a painting of a windmill at a street vendor. Well played. Peter was excited to announce that his bandage was off of his stitches. Best part. Fast forward to the three on one for that gem of a moment.

Who got kicked off: Queens Natasha and Kelley, the elder millennials, were sent home this week. And the rest of the youths are headed to hometowns. Also, weird moment. Peter brought back Hannah Anne to the ladies as the fourth lady for hometowns and they cheered. It made me uncomfortable.

Peter mentally preparing himself for the day ahead.

One-on-One Date: Madison got the first one-on-one, being her second one-on-one date this season. Meanwhile, Natasha’s gotten zero one-on-one dates thus far. Madison and Peter went fishing, catching feelings. Madison told Peter how important her faith was to her and that it was all of her and that she wanted a husband who would be a spiritual leader in their household.

Peter told her at dinner that he was falling in love with her. Madison got the rose, is headed to hometowns and they danced the night away to a fun band.

And then Peter’s family popped out again! Just kidding.

Natasha: “Literally we could be walking down the street and I would be so happy.” Good. Because that’s all you’re going to be doing today.

They walked up and down the streets, watched some street performers and Peter got so excited about all of the street vendors and especially a treat from his childhood that a street vendor was selling. At dinner, Natasha asked how Peter was feeling about her, while simultaneously telling him her older bros were very protective of her. Peter was like I’m not feeling it and did not give her a rose. Natasha responded, “I hope you are following your heart and you find what you’re really looking for. I know I will.”

One-on-One Date: Kelsey got the third one-on-one date. She did a cirque de soleil jump into his arms – like full on hop, two feet on the ground plant, jump into his arms and wrap the legs around. It was a feat. They rode four-wheelers around the mountains of Peru and then ran up a mountain and laid down and made out. Peter asked her what she wanted for a family. Kelsey said she wanted to work a couple days a week with her own thing and stay home with the kids.

Three-On-One Date: Kelley, Victoria F., and Hannah Anne went on a three-on-one date. One will leave and two will go to hometowns. Victoria F. picked a fight with Peter. Homegirl wants to go home. It was an uncomfortable conversation.

Quote of the Night: Victoria F. “I feel like every time we’re together you’re always in a mood.” Eeek. Peter defended his stance, saying he wasn’t in a mood and tried to get her to open up. Peter likes her.

Kelley and Peter had a great talk. Peter kept hearing Kelley say “fun.” And he wanted it to be more than fun. She took a nap while Peter talked to the other two girls. She was a vision in all white.

Peter took Victoria F. to the waiting car and then psyche! Gave her the rose. He returned to Hannah Anne and Kelley and gave his final hometown rose to Hannah Anne. Kelley was on her way home.

Hometowns are next week (or in this case tonight by the time this is posted!) with Hannah Anne, Madison, Kelsey, and Victoria F. In the previews someone talks to Peter about Victoria F. and causes a finasco, Kelsey’s family looks all like the same person and Madison and Hannah Anne are taking him home to meet the parents. 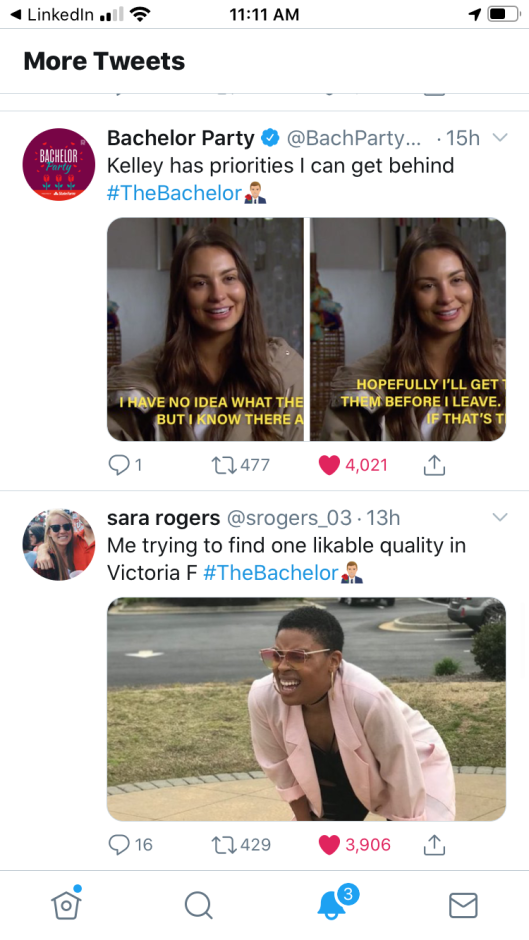 Tweet reads “I have no idea what there is to do in Lima, but I know there are alpacas. Hopefully I’ll get to see them before I leave.”

We couldn't quite see all of it, but here's what we think Hannah Ann's note said … pic.twitter.com/EszYSrg6UB