Musicians and Hot Tubs Straight OUt the Gate. Capitol Records Dates, “And Remember to Listen to Your Heart.” Chris Harrison has a new Tagline and We Are Here For It.

Real talk, the show’s premise is based off of the movie A Star is Born. It takes all of the musicians aspiring to be famous, all with the same shared passion and puts them in the Bachelor Mansion to find love. I…just…like I don’t care about their musical careers. I was pleasantly surprised by their talents, but really I just want to watch them fall for each other, not try to build a career, which feels like will take top priority? Like are they going to listen to their hearts or their guitar heartstrings? I guess time will tell.

That said, I’ll be watching every Monday. Damn you, Chris Harrison, and your charm. And Ryan and Sheridan and Gabe, your charm! Shakes fist* Okay, I’m in on Listen to Your Heart during these quarantine corona times every Monday night at 8|7c.

The Premise: Single artists and songwriters arrive at the Bachelor Mansion and mingle night one. The first part of the show they go on dates, similar to how Bachelor in Paradise is set up. The first couple of weeks they give roses to each other, alternating weeks – ladies handed out the roses the first week, and the men will hand out the roses the next week. Then they will move into paired performances and celebrity guest judges to determine who will be eliminated based on their performances and chemistry. Got it?

Jamie and Ryan were first to arrive at the mansion. Ryan said he had had brain surgery straight out the gate. Alright, alright.

Then Trevor, the look-alike-Jedd, walked in and zeroed in on Jamie. Not cool.

Sheridan walked in with his awkwardness and long hair and cowboy hat and I like him. No, I love him. I want him to find love. He’s so cute and sweet from Austin, Texas.

Michael Todd tried to kiss Savannah straight out of the gate. Spoiler alert: He goes home.

Jamie and Trevor got in the hot tub, ditching their cocktail attire.

The pair went to Capitol Records to record the song, Gravity by John Mayor with the producer that produced it for John Mayor. Ryan got to use John Mayor’s guitar. Also, the pair sang using Frank Sinatra’s microphones. All very cool things for them.

We find out Ryan idolizes John Mayor, no surprise. They look exactly the same. It was sweet when during the warm-up, Ryan aka look-alike-John-Mayor adjusted the key on the guitar to match Jamie’s range and make her at ease. They recorded a song and they were both actually very good. They’re talented. I was not expecting that. I can see why the producers gave Ryan a date card to further the bond between him and Jamie because Ryan is effing talented, and I’d watch that.

Trevor, the cheater who looks like effing Jedd from Hannah B.’s season of The Bachelorette, is planning on zeroing in on Jamie who’s downfall is that she loves a player. And we do not like Jedd nor Trevor, but Trevor is from California. And we like California. So we are torn.

Meanwhile, Sheridan is being cute and playing guitar by his lonesome on the outdoor patio porch.

Second Date Card: Lumberjack Matt got the second date card. Choose someone who is your jam. He chose Mel. Matt and Mel had a semi-private backyard concert where the Plain White Tee’s performed.

Matt and Mel (spoiler alert, Mel did not choose Matt at the rose ceremony) Awko taco.

Back at the ranch, Rudi was upset because she had been vibing with Matt. She sang a sad song with someone else on the piano. This is how I anticipate the season going. 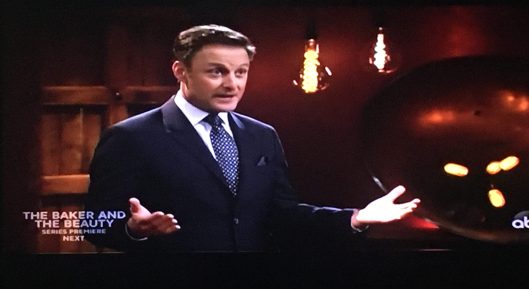 The ladies had the roses this week so they chose which of the men to bring into next week. Four men went home. And the last bit of advice Chris Harrison left with the ladies before they handed out the roses was, “Ladies, Listen to your heart.” Nice, Chris Harrison, nicely done.

Frontrunner faves that I don’t care what their voice sounds like are Cheyenne and Gabe. I love them. They are the sweetest. Oh and Sheridan, of course. And obvi we love Rudi for choosing Ryan, and we love Ryan’s voice, so there we go. Let’s see who else gets introduced this coming week.

The show’s premise is based off of Lady GaGa and Matthew McConaughey’s movie, “A Star is Born.” It’s hard to recreate an Emmy-nominated movie in a television show so no judgment, and I’m still gonna watch because of corona times.

Previews: This week we get a preview that Trevor is shockingly not here for the right reasons and cheated on lots of GF’s. Trevor henceforth shall be known as fake Jedd. (Fucking Jedd). Because he stole Jedd’s jacket and hairstyle and cheating tendencies. Shame on you, fake Jedd, shame on you.

Also, be sure to watch Group Dates with Lauren Zima and Chris Harrison every Tuesday and Thursday at 6:30pm PST on Chris Harrison’s Instagram Live. They talk about Listen to Your Heart and have guest appearances and donate money to benefit organizations during the COVID-19 crisis. It’s the best.

me 2 months ago: eh I’m not going to watch #ListenToYourHeart
me to my wine now: #TheBachelorLTYH pic.twitter.com/LqmeKt8EPP

when you’re not sure how you feel about the singing but then ryan opens his mouth #listentoyourheart #thebachelorltyh pic.twitter.com/NtdlmEsf7n

Raise your hand if you are watching #ListenToYourHeart  after laughing and making fun of it for the last 3 months? #TheBachelorLTYH pic.twitter.com/qQBs7adyGQ

Me getting ready to live tweet #TheBachelorLTYH because it’s the most exciting thing to happen in my life for the past month #ListenToYourHeart pic.twitter.com/FfNtU1zpxa

Ryan has Grocery Store Joe energy and no one can convince us otherwise#TheBachelorLTYH #BachelorNation #TheBachelor #ListenToYourHeart pic.twitter.com/2gyWV6bosv