Boyz II Men. That is all. I could have died happy just listening to them sing their sultry song from my late adolescence, “I’ll Make Love to You.” The bachelors’ rendition was a little less than enticing, but more on that later. Let’s get to the good stuff. If you missed this episode of the two parter this week, do not fear. You didn’t miss a whole ton. ABC is saving the drama for tomorrow night. This was just the build-up.

Who got kicked off: Bradley the opera singer and Lamp Man Brett the hairstylist were let go. Ron had to leave on his own accord because of a friend’s sudden death.

One-on-One: The first one-on-one went to Nick. Andi took him on a bike ride around beautiful Santa Barbara. Nick told her he had a school boy crush on her. At dinner Andi asked him the most terrible question you can ask another person on a date. “Why do you think you’re still single.” Because the universe has yet to hand me Ryan Gosling on a silver platter. I don’t know. Why are you still single, Andi? There has got to be a better way of finding the same answer. If I were Nick I would have flipped it back on her, but like the good boy he is, he gave her more insight into his life story. He had been engaged once and it didn’t work out. My favorite part was when they put Andi’s comment of “He’s definitely said a lot tonight and opened up a lot” overlaid with them making out on the roof. Really opening up.

Group Date: The group date took place at Hahn Hall, UC Santa Barbara’s classical music training center. The group entered the auditorium where Boyz II Men was performing “I’ll Make Love to You,” and I immediately reverted back to my giddy juvenile self. As did the bachelors. The boys were split into two groups to work on their singing chops to prepare for a live performance that day. As you may have guessed Opera Man Bradley was all about it. Boyz II Men? Not so much. They were hilarious in their commentary and coaching of the bachelors, making me fall more in love with them.

Andi’s interpretation of the date: “We’re going to separate the boys from the men.” I see what you did there.

Chris Harrison, on the other hand, wasn’t so kind with his puns…

After Boyz II Men performed for the crowd, host Chris Harrison segued to the bachelors’ performance with, “And now for something completely different.” I have to say he was right. They completely butchered that song. It was an assault on the ears is what it was. Granted, I can’t carry a tune and will admit to my family turning up the volume on the car radio when I join in, but really. That was just not meant for listening. Two of the bachelors forgot the lyrics. Pan to a little girl in the crowd with a scrunched up face and her hands over her ears. 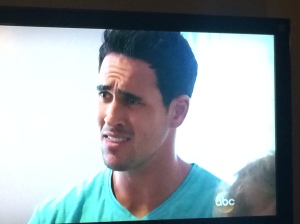 At the after party, Josh received the rose on the group date. And who could blame him. There was so much sexual energy between Andi and him on their one-on-one time. I think my TV was emanating sex. After staring longingly into each others’ eyes, there was a good 5 minutes of them making out hard core. As you’ll remember Josh is a former pro baseball player and hails from Andi’s same hometown of Atlanta. Maybe they have some sort of connection there. Or maybe it’s because Josh looks like this:

One-on-One: Congrats JJ the Pantstrapreneur! You are the lucky winner of the worst date on the Bachelorette! Helicopters, beaches, private concerts? No, let’s save that for later. I have something better. Let’s dress up like old people! I think when the producers were thinking up the dates, they posed the question: How can we suck the sex appeal out of the air immediately? I understand the sentiment behind it. Let’s see what it’s like in 50 years when we’re still together and happy. However, I don’t need to see that. I will say, it made an excellent prank on unsuspecting onlookers who saw two elderly folk doing cartwheels and playing football in the park. Plus, JJ pulled a Werther’s out of his pocket and I couldn’t help but smile.

Sadly, that’s accurate, JJ. And going in for the kiss dressed like that…not the greatest of ideas. Also, apparently when you’re old, your voice is supposed to drop 10 octaves. Andi’s voice immediately changed to one of raspy creepiness, which is hard to capture. Well done.

The Drama: Andrew got a waitress’ number 3 days into the show’s taping. Josh and another guy from the house approached him, trying to get him to tell Andi. I think all of that may be coming out tomorrow night.

The gang travels to the exotic state of Connecticut. In the preview of tomorrow night’s episode (Monday 8|7c) when Andi breaks down, one of the bachelors tells the camera in his interview, “I thought we were all in this together. But I’m starting to realize it’s a competition.” You’re just now realizing this? Do you know what show you signed up for? They briefed you right? She only ends up with one dude. I appreciate your affection for collaboration, Andrew (I’m pretty sure it was Andrew), but this is not one of those times.