After a breakup some go to the spa, some stay home in their beds, and some, well some, get a tattoo?  Yes, that’s right. Ali Fedotowsky got a tattoo yesterday (Dec. 30) in LA.  She tweeted that she had been planning it for awhile now.  Maybe when her relationship with Roberto started to get on the rocks?

In any case, Ali tweeted before, during, and after pics of the tat, which was the word “Endure” scripted on her right wrist.  The font?  Her grandmother’s handwriting (So sweet!!).  Ali revealed the meaning behind the tattoo (not the reasoning for having it done) over Twitter quoting her grandmother Molly Fedotowsky, “As we go through life we experience sunshine and rain…the secret is to endure.” 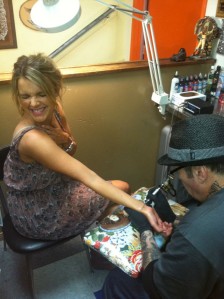 Fun Fact: Ironically, on Ali’s season of The Bachelorette, one of the contestants, Kasey Kahl, got a tattoo on his wrist to show his love for Ali.  It was of a shield with a heart behind it and subsequently led to his popular catch phrase of “I will guard and protect your heart.”  Kasey didn’t make it too much farther on the show after that.

What do you think, Bachelor Fans? Like it, love it, not a fan?

5 thoughts on “Ali Fedotowsky Gets a Tattoo”