Ben's ladies, who was eliminated The Bachelor

Who got kicked off:

The ones in red were newly kicked off this week. 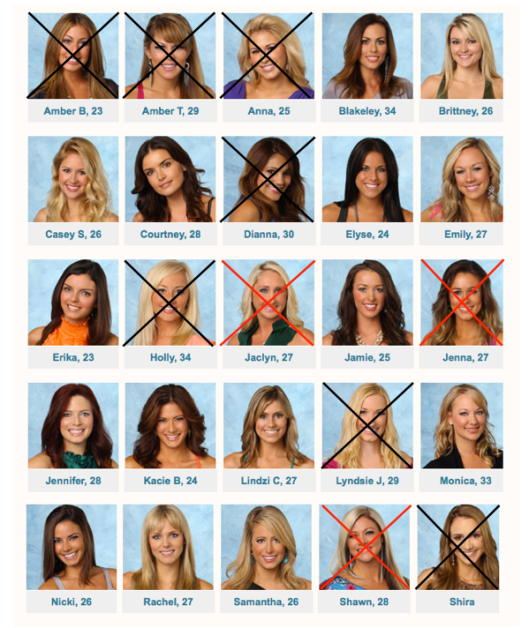 What you need to know:

Kacie B. (girl-next-door, Southern sweetheart) got the first one-on-one date where she taught Ben a few baton-twirling tricks.

Blakeley (the well-endowed Maxim model) with her aggressive, go-get-’em attitude has become a source of drama within the house.  She received the rose on the group date (which consisted of the girls dressing up in absurd costumes and performing a show a cute brigade of children wrote).  At the cocktail party, the bachelorettes were none too pleased with Blakeley when she tried to steal time away with Ben from other girls TWICE.

Courtney got the other one-on-one date where Ben brought along his adorable dog, Scotch.

I’m slightly embarrassed with the tenacity in which I am playing this game (especially because despite my many invitations none of my friends have yet begun to participate).  But no matter.

My picks from last week: Kacie B., Blakeley, and Courtney – boom.

Based off of the scoring system for next week’s Bachelor Fantasy game (see below) and the little preview ABC gives each time you play the game…my picks for Monday are Lindzi C., Jamie, and Kacie B.

My picks for Monday: Lindzi C. (the one with the horse) – Ben hasn’t had the opportunity to spend a lot of time with her, yet he gave her the first impression rose

Jamie – Seems like a super sweet girl (she raised her brothers and sisters when her parents passed away) Plus, Ben has a thing for quirky brunettes.

Kacie B. – Based off of their one-on-one date they both seem to really like each other.  Let’s just hope Ben doesn’t piss her off when he gives a rose to Blakeley (because c’mon we all know that’s gonna happen)